If you’ve visited your Albertsons lately, you might have seen or heard a little about the new Preferred Rewards Card. Last night at my Albertsons, someone was actually on hand to upgrade my card – right in the store!

I thought I’d take some time to break down what this program is and how you can benefit.

What is the Preferred Rewards Card?

Simply put, under the new program, you’ll now earn 10 points for qualifying $1 you spend with your card. When you reach 5,000 points, you’ll automatically receive a $5 Rewards Certificate at the bottom of your receipt. Your card will track how many points you’ve earned, and you’ll be able to see how many points you’re at by looking at the bottom of your receipt. You can then turn around and use this on your next grocery purchase. 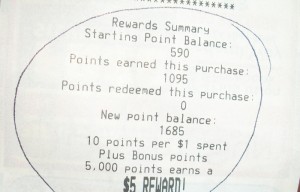 What I like about this Rewards card is that you’ll earn a $5 for each 5,000 points you earn. The gal that helped me at the store last night told me that you can redeem as many as you wish in a single transaction, too! (Just make sure your coupons don’t exceed your pre-tax total.)

There are a few ways you can earn points, particularly as the program ramps up in select cities.

When I upgraded my card in-store, I was also given these puppies… (there were actually four, but I redeemed the one for this week today!) 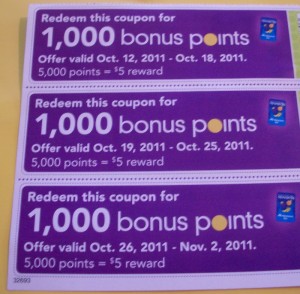 All this to say, I think I’ll be getting my first $5 coupon reward pretty soon!

You should also note that the Rewards program runs in quarterly cycles. Pay attention to this because your Rewards will return to zero on four “reset days”:

As an example, we’re in the September – November earning period. You will rack up points through November 30th, and then they will return to zero on December 1. Any $5 Rewards Certificates you earn will expire on December 31.

I’m sure the question you really want an answer to is: “so what about coupons?” Here’s the good news. You’ll earn 10 points for every $1 on qualifying items you spend, pre-coupon! So that means if you go to buy a $2 yogurt and you have a $1 coupon, you’ll actually receive 20 points total!

Store coupons, however, do change the game. You won’t receive any points for dollars saved with store coupons, like Twice the Value coupons.

Not all Albertsons are part of this program. Here is the complete list of stores that launched with this program in September:

Spokane and San Diego have already been participating in this program for awhile. Albertsons also plans to launch in other cities in the near future, so stay tuned!

What do you think of this program?

7 thoughts on “What is the Albertsons Preferred Program all about?”