↑
You are here: Home / Babies & Kids / 12 Fun No-Supplies Games to Play with Your Kids in the Car
Disclosure: the post below may contain affiliate links. When you make a purchase or take action using these links, the site makes commission. For more information, please see my Disclosure Policy. 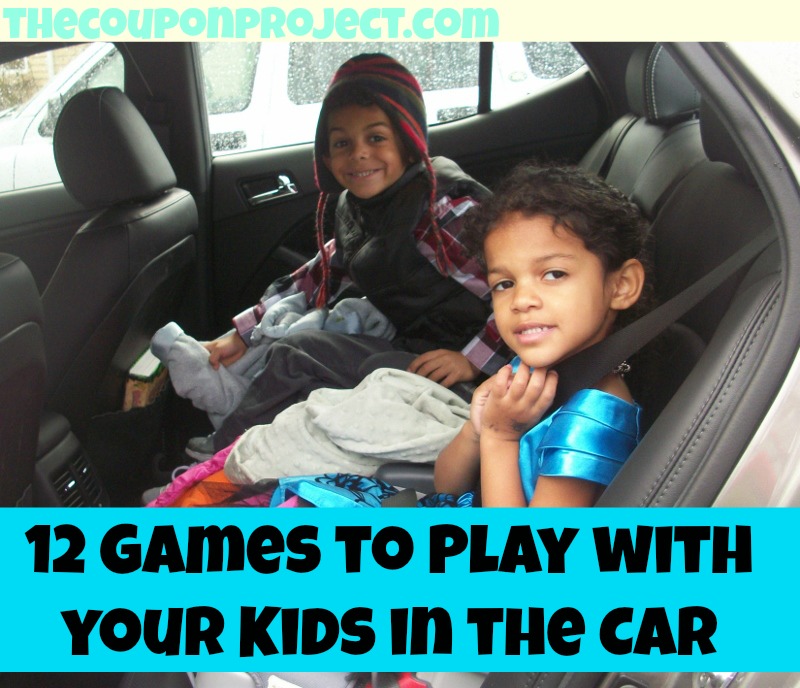 My kids frequently ask me to come up with a game while waiting in line or driving in the car. As you can imagine, I can’t whip up any supplies, so I just have to use my imagination. I thought I’d share my list so you could keep it handy the next time you’re looking to keep your kids occupied!

4. Joint story. This is a great one because you can make it as long or short as you want! Start by telling just part of a story, and then have the next person tell the next part. Cut them off, and have the next person tell the next part, and so on. If this is a bit beyond your kids’ age level, have them give you a few characters (Superman, Mommy, and your pet lizard) and a place (Disneyland) and invent a story using their suggestions. A bedtime favorite in our house.

5. Count to 1,000. Believe it or not, we actually did count to 1,000 once in our household, but we divided it up among a few car rides! If your kid is able to do this on their own, even better! Based on my experience, it should take them roughly 40-50 minutes to complete.

6. Describe. My son made this one up a few weeks ago, and it’s another one that everyone can participate as a team. Start by coming up with an object and have everyone say as much can be said about that object. For instance, “describe a wheel” might be – they are round, they are on vehicles, they can be different colors, they can be different sizes, they help people move, etc.

7. Name that tune. Pretty much exactly what you think! Take turns humming bits of songs and have people guess. Of course, we have some variations too. You can try clapping the rhythm to make it trickier to guess. My daughter also likes to play a version where she sings soooo quietly it’s really anyone’s guess what she’s singing.

8. I Spy. Sure you’ve played this with your kids while waiting in line at the store, but have you ever tried playing it in the car? Try it. It’s not easy since everything is racing by – you have to be quick! You could also do a variation where you try to find as many fire hydrants as possible, or grocery stores, or Hondas (my kids’ favorite; don’t ask why!).

9. Alphabet Spy Game. Here’s perhaps a better version of the “I Spy” game for the car. Have everyone look out their window and find something that starts with the letter “A”, then “B”, and so on. You could work together as a team, or wait until everyone found their own “A” item before moving onto B.

10. Alphabet Games. The alphabet has lots of possibilities for games! About a month ago, my son and I played Star Wars ABCs in the car, which he loved! Anankin, Boba Fett, Clone Wars, Droid, etc. You could also do places, foods, animals, kids’ names, etc.

11. OK or not OK. Admittedly, this one has an object lesson to it – so I love playing this one as much as the kids do! I’ll describe a scenario and they have to decide if it’s “OK” or “NOT OK.” For example: “you see a kid that looks a little different at your school and some kids are saying some mean things about him – OK or not OK?” I then try to get them to explain why it’s OK or not OK. If it’s not OK, I may also ask, “so how would you handle that situation differently?” This game always brings up some great conversations around respecting one another, kindness, and diversity.

I hope sharing some of these ideas will get you started the next time your child is saying they are bored or you’re faced with a monstrous line at the post office or a 1-hour car ride to see grandma.

Share11
Pin2K
Tweet
2K Shares
Disclosure: the above post may contain affiliate links. When you make a purchase or take action using these links, the site makes commission. For more information, please see my Disclosure Policy.