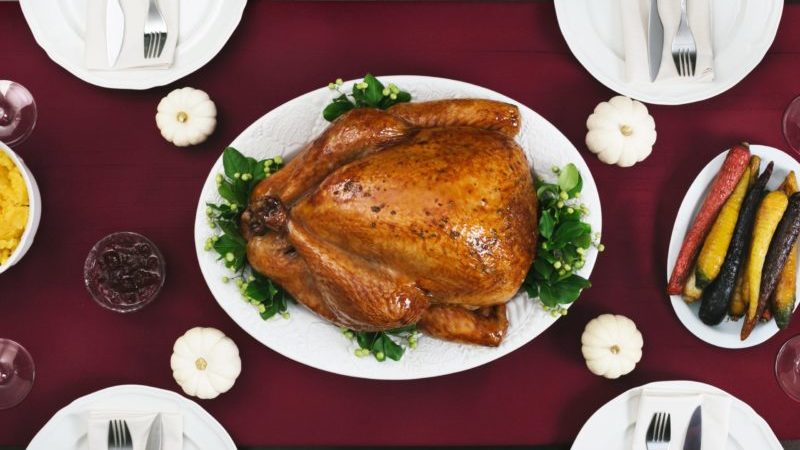 When it comes to finding the best price on your Thanksgiving Turkey, we have you covered. Best Turkey Prices, Coupons & Deals Once again this year, we’re rounding up the best turkey prices at grocery stores across the nation! As … 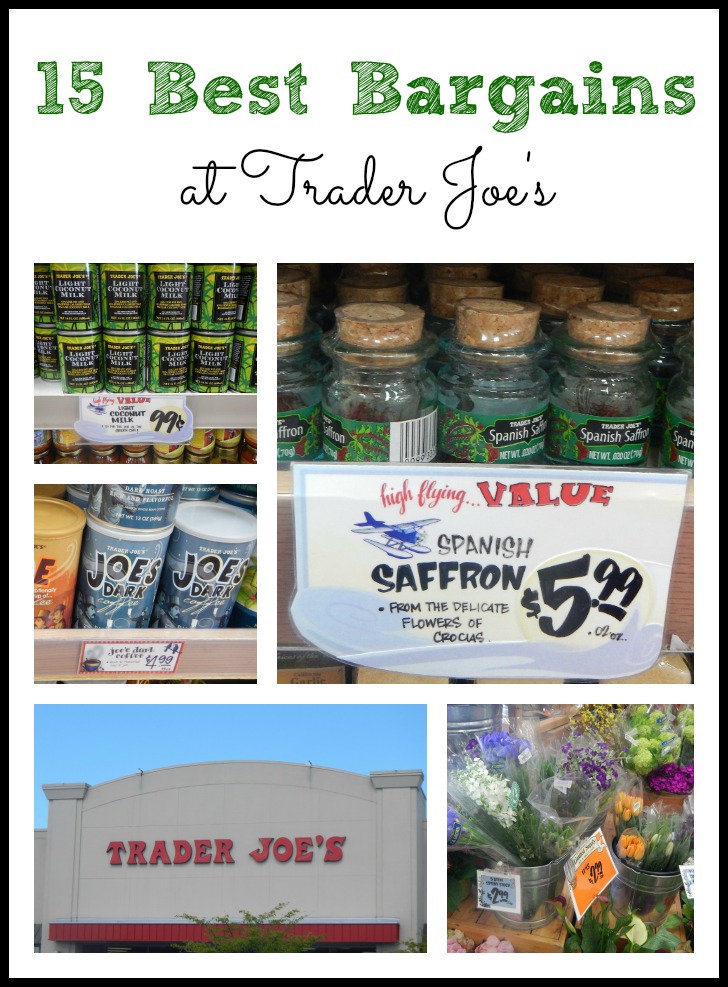 There are a few items I buy at Trader Joe’s regularly that I believe to be a really good deal. While contemplating this recently, I got a great idea for a post: uncovering the best bargains at Trader Joe’s!

As I know how easy it is to gravitate toward the same items, I decided to ask my friends what they thought some of the best values were at Trader Joe’s. Not surprisingly, they mentioned many items I had not considered!

Earlier this week, my lovely friend and I spent some time at Trader Joe’s, noting the prices/size of each of these items and many more. We arrived at a list of nearly 40 items. While many things did seem to be priced well, I decided to dig a bit deeper.

Taking my list, I went to three area grocery stores to see could I find a better deal. There were definitely some surprises: some things I thought were good deals turned out to only be just OK, while other things ended up as clear winners.

After price comparison, I arrived at a list of 15 items. A few notes on my selection criteria:

I also want to make it clear that it’s quite possible you might best these prices in other ways. For instance, you might get a better deal by waiting for a sale with a coupon, a loss leader at another grocery store, buying in bulk, or growing your own.

For the purposes of this post, I’m just hoping to point you to some really good deals, in the absence of sales, coupons, or other tactics.

With that, here are the items that made the cut:

Not only is this brand more expensive at other stores, some stores don’t carry it at all.

This is a great price for a large container of fresh basil! At two other area stores, I found the same size priced at $3.99 (full disclosure: one was organic). Incidentally, you can also buy a large potted basil plant at Trader Joe’s for $3.99 – much smaller ones were selling for the same price at another store I visited.

While I was able to find a pound of dates for cheaper at other stores, they were not Medjool dates, which tend to run more money. This is another item that you may struggle finding at other grocery stores, too. I only found Medjool dates at one of the three comparison grocery stores I visited today.

My friends both suggested I check out the price on canned coconut milk at Trader Joe’s. At $0.99, this was definitely one of the best bargains I noted in my research!

Trader Joe’s offers a variety of different hummus flavors. At $1.99 for an 8-ounce container, I’d definitely include this in the best bargains category. Two other grocery stores I visited were offering the same size of their store-brand for $2.99.

Several of my friends suggested that Trader Joe’s had good deals on nut butters, but after doing some research, the only nut butter I found was a deal was the organic peanut butter at $3.49. The regular peanut butter was priced at $1.99 and I was able to find lower prices than that at all three grocery stores I visited today. (Still, the Trader Joe’s PB is just peanuts and salt, if you’re looking for a product with super simple ingredients.)

Trader Joe’s Mango Ginger Chutney is easily one of the best bargains in the store! This specialty condiment is delicious when served on chicken or mixed in rice. It can also be expensive at other stores! Two stores I visited today were selling another brand in the same size for over $5 a bottle. 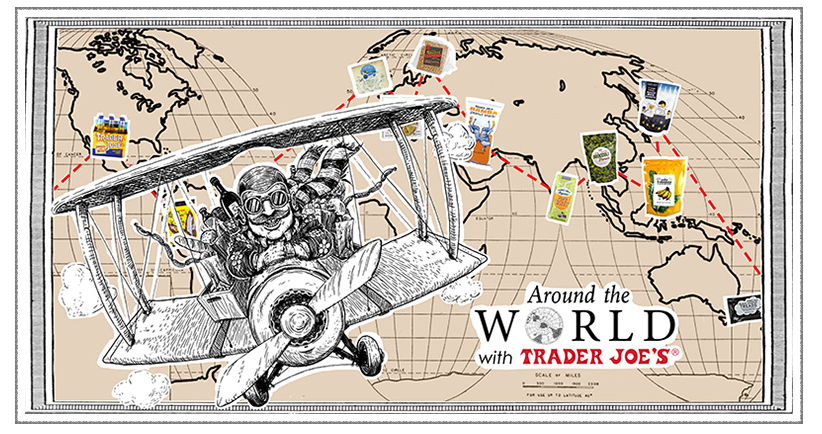 Trader Joe’s has released a new Fearless Flyer for March!

While you can see the entire flyer over at the TraderJoes.com website, I wanted to call out a few items that I’ll be looking to pick up on my next trip to the store: 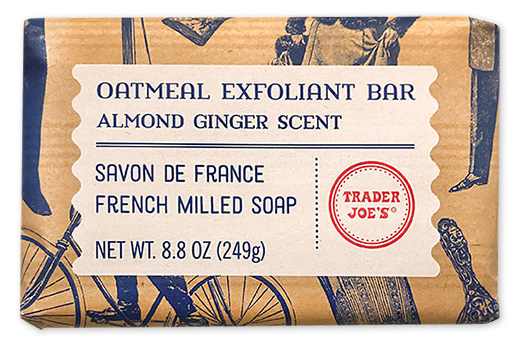 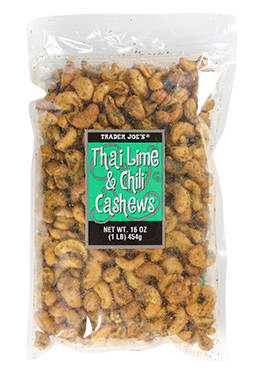 Thai Lime & Chili Cashews, 16 oz, $7.99
While this is a featured item, it’s not a new item. And, it just so happens to be one of my all-time favorite Trader Joe’s snacks! 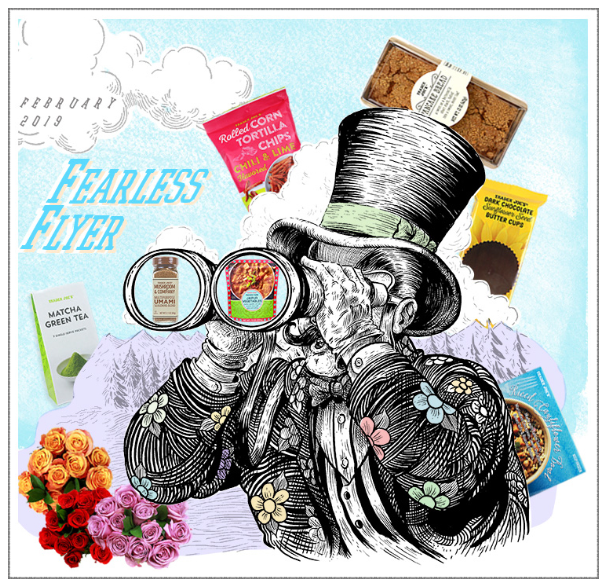 Trader Joe’s has released their February Fearless Flyer! You can see all the features over at the Trader Joe’s website.

I wanted to highlight just a few of the items popping out at me: 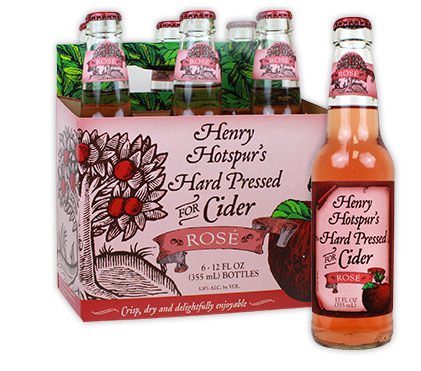 Angry Orchard makes a rose cider which I love. I would absolutely try Trader Joe’s variety – plus, it’s a couple bucks cheaper! 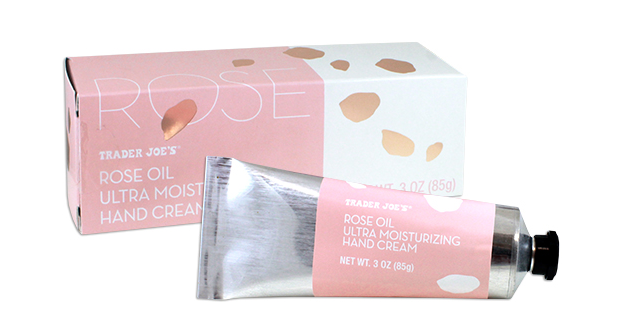 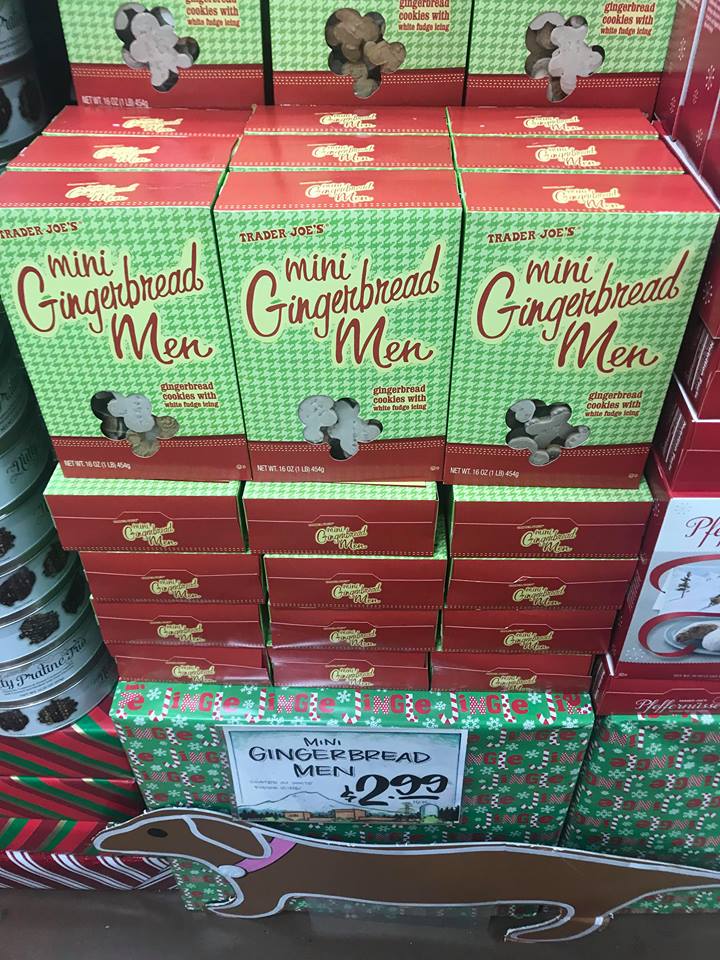 To tingle your taste buds, I thought I’d highlight a few of the things I spotted today: 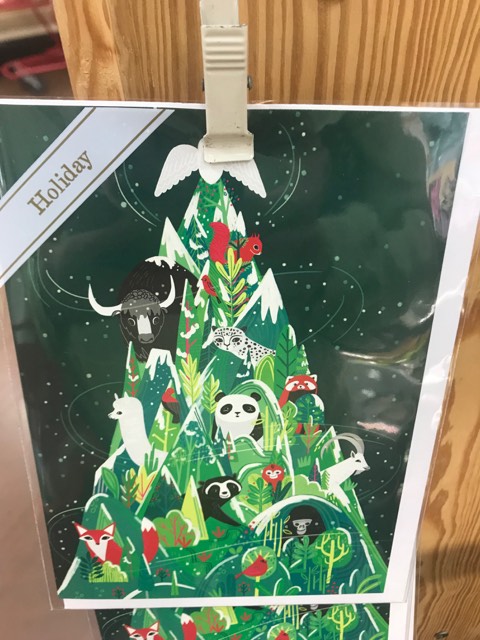 Trader Joe’s is always such a great source of cards (you might want to read how I recently started a card/letter box using Trader Joe’s cards!), but you really need to check out their selection now. I found all kinds of cute holiday cards like the one pictured above. And, only $0.99! 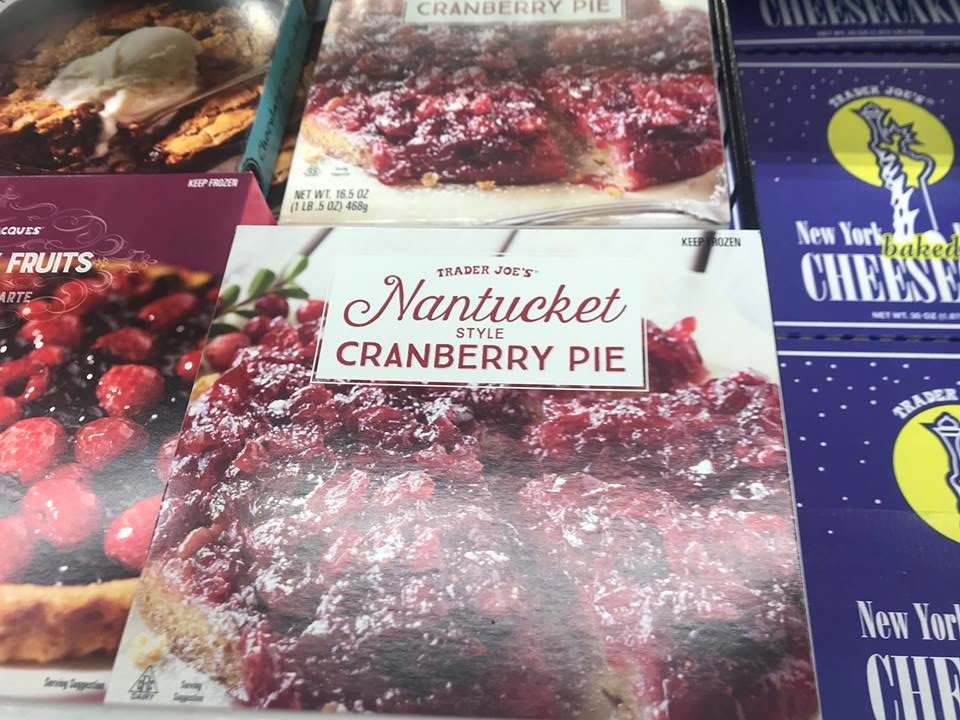 #2: Nantucket Cranberry Pie. I didn’t see a price on this, but MAN does it look good. It’s nice to see cranberries being used as the centerpiece instead of a side. If you’ve tried this, I’d love to hear what you think. 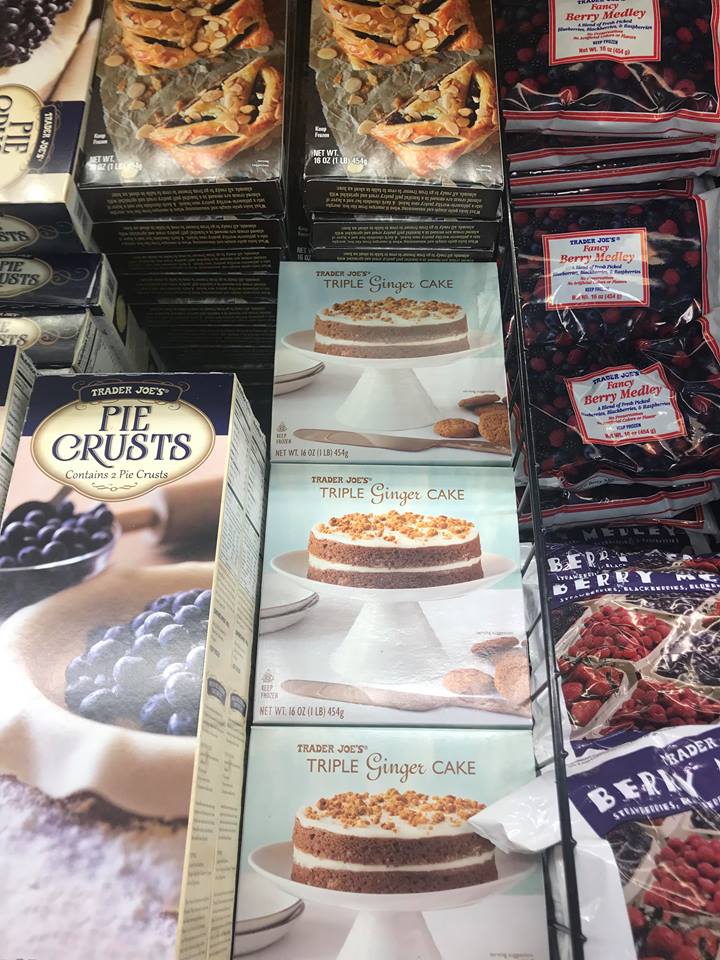 #3: Triple Ginger Cake. This is another delicious looking dessert I spotted in the freezer aisle. 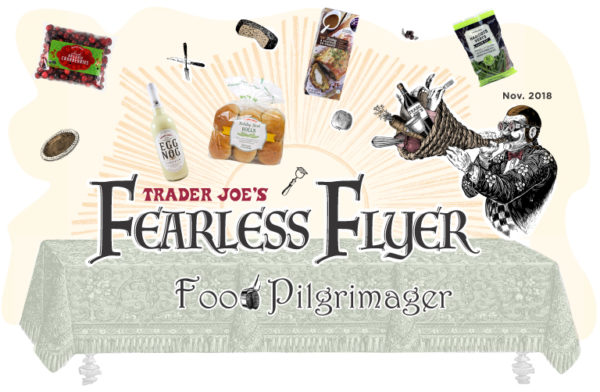 The new Trader Joe’s Fearless Flyer is here! This month’s edition (November 2018) features items you might use for your upcoming Thanksgiving dinner. I’ve broken out the featured items by section here, but you can also peruse the featured items online.

Keep in mind that some of these items are seasonal so when they’re gone, they’re gone! Also note that Trader Joe’s will be closed on Thanksgiving Day, November 22nd. 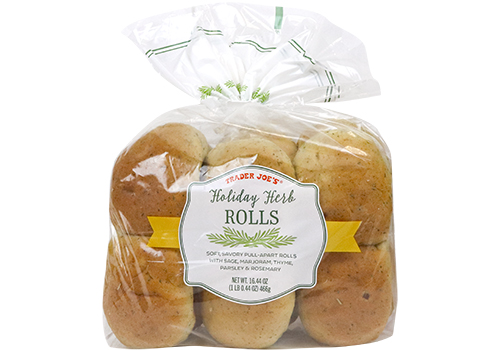 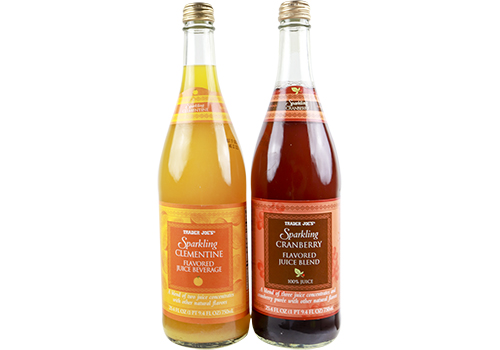 I always look forward to shopping at Trader Joe’s in the fall – that’s when you’ll find all the pumpkin and holiday treats! I decided to pay a trip with my daughter today to see what we could find. While we didn’t see tons of pumpkin things (I bet those will come in late September – early October), I did spy a few noteworthy things to share with you!

Here they are, in no particular order. 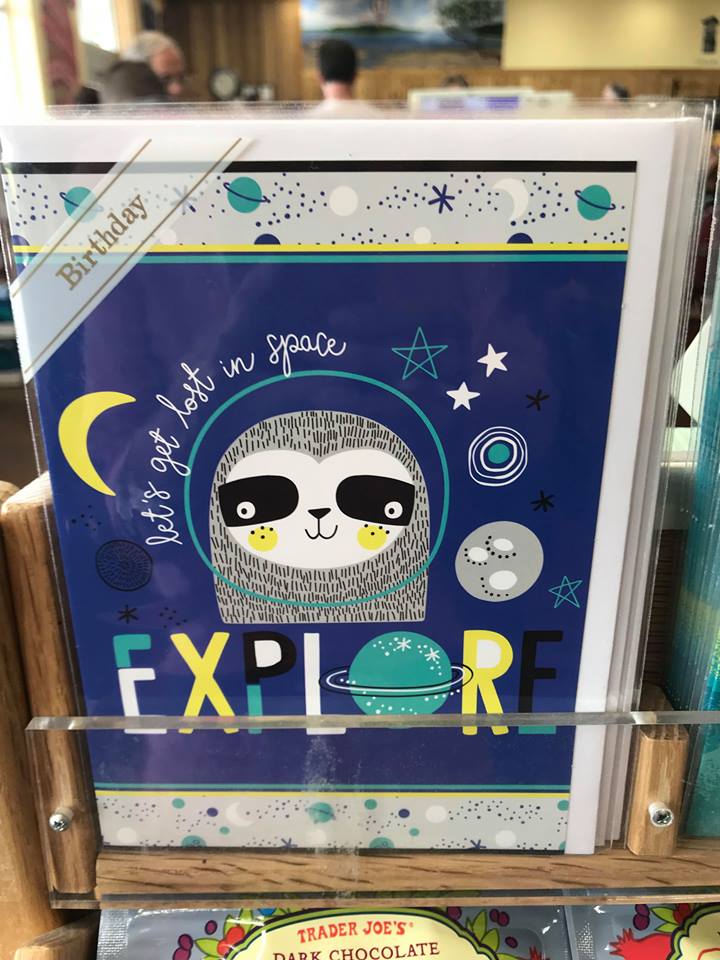 I love Trader Joe’s greeting cards! They are always cute, and just $0.99 each. I loved this one with a sloth on it, but couldn’t think of who to give it to! Probably should’ve bought it anyways and hung onto it until the moment arose. 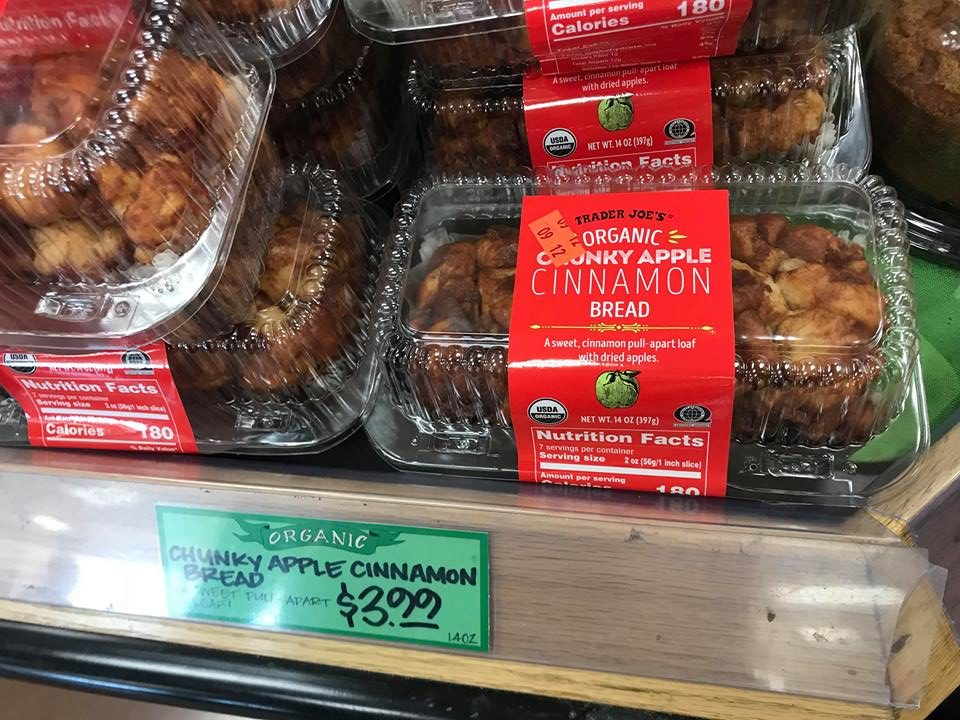 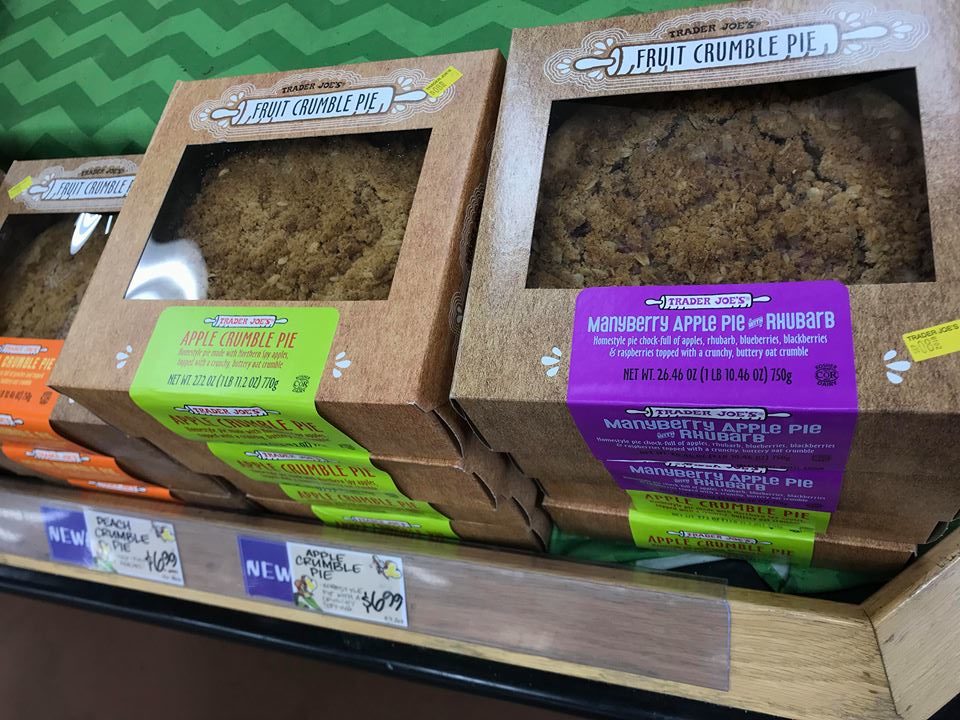 Fruit crumble cakes for $6.99. There are a few different flavors like manyberry apple pie & rhubard and apple. 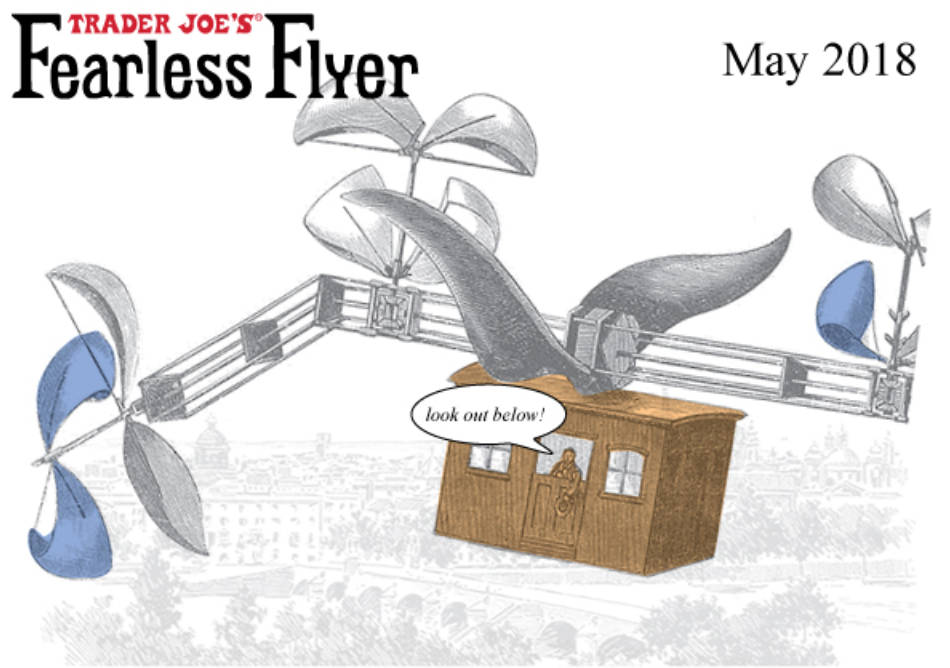 It’s May… and I really cannot believe that it is. I feel like I’m in the process of finalizing my New Years resolutions still (and I’m pretty sure there are a couple Christmas decorations still up in various spots around the house!). No matter if I’m ready or not, spring is here and that means Farmer’s Markets, BBQs, and longer days. I noticed Trader Joe’s has released their May Fearless Flyer and I thought I’d call out a few of the delicious things that are popping out to me. Of course, you can see the entire flyer on their website. 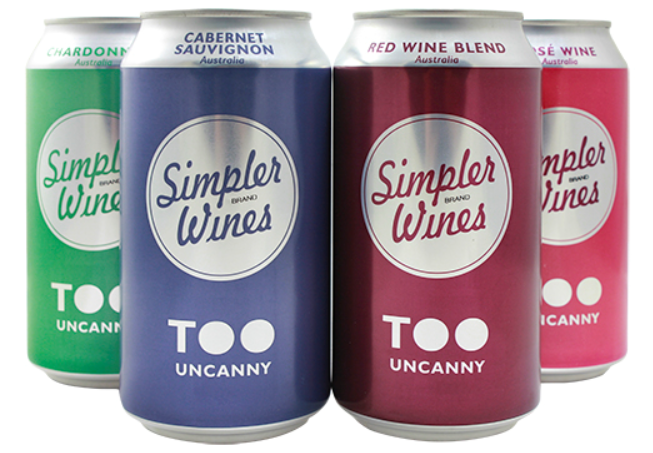 These canned wines come in 4 varieties – Red Wine Blend, Rose Wine, Cabernet Sauvignon and Chardonnay and each can is enough for 2 glasses. Given that, this is a pretty incredible value! 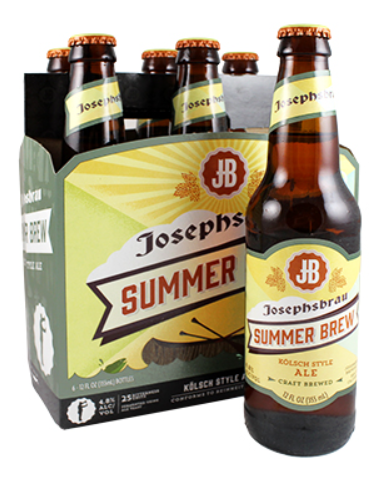 I love a good summer brew and would love to try this variety! According to the description: “It’s robust in flavor, light in body, and for added authenticity, it’s top-fermented with a yeast strain imported from German.” 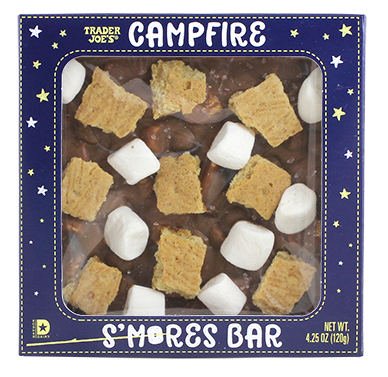 I love the idea and flavor combination of S’mores without having to worry about the fire! This is a solid milk chocolate bar studded with mini marshmallows and graham crackers. Sounds good to me! 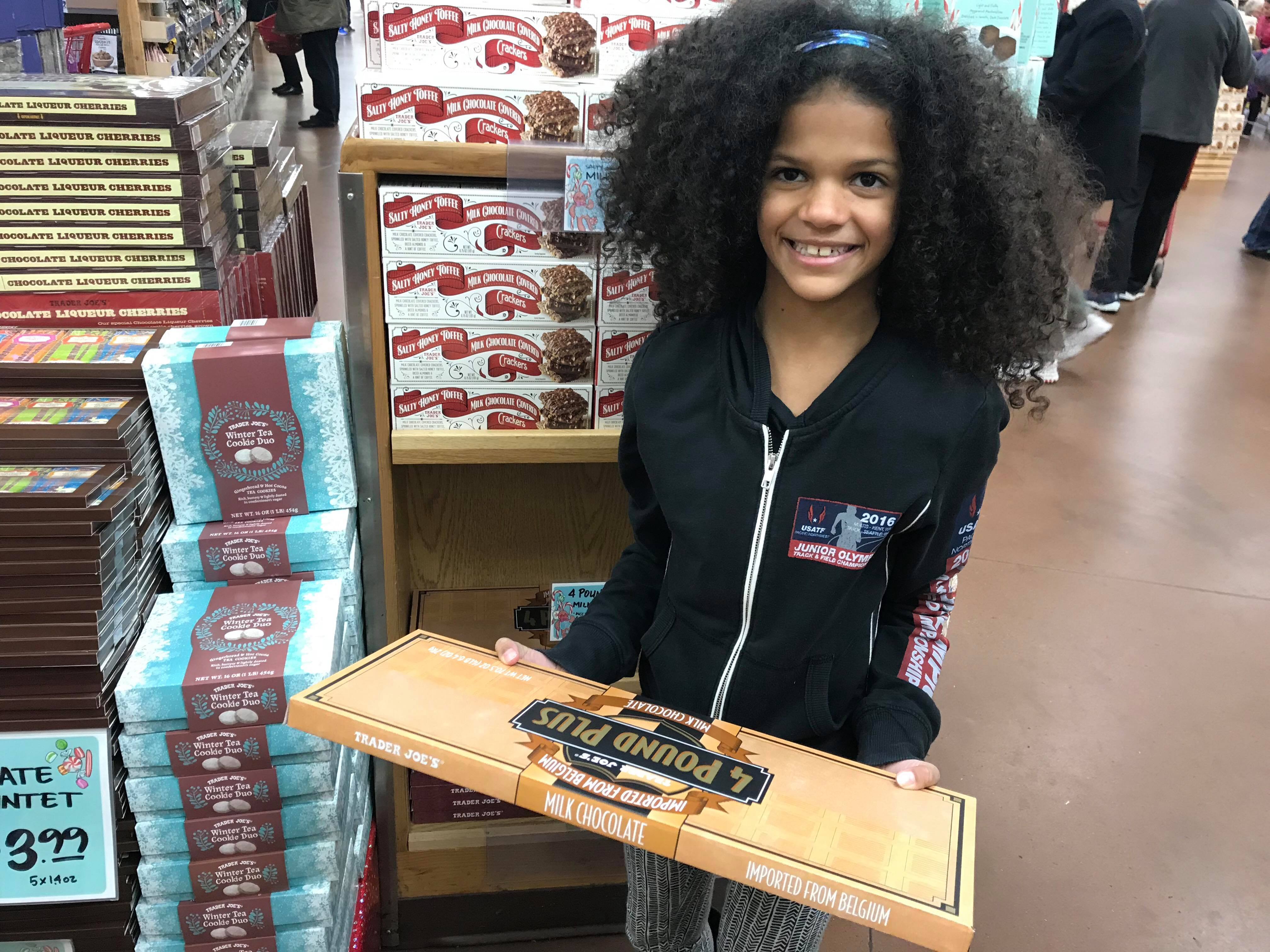 To tempt you further, I thought I’d share some of what we spotted. 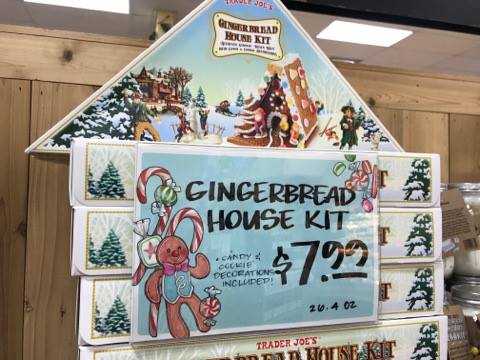 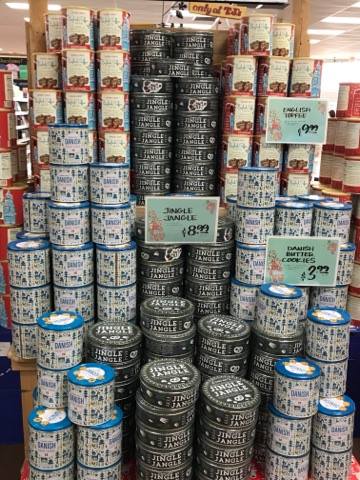 I found an endcap full of beautiful cookie tins! I *HAD* to pick up a $3.99 tin of Danish Butter cookies because it reminded me so very much of my late grandma. She always had these at holiday parties. I can’t wait to pull them out for our Christmas Eve party! 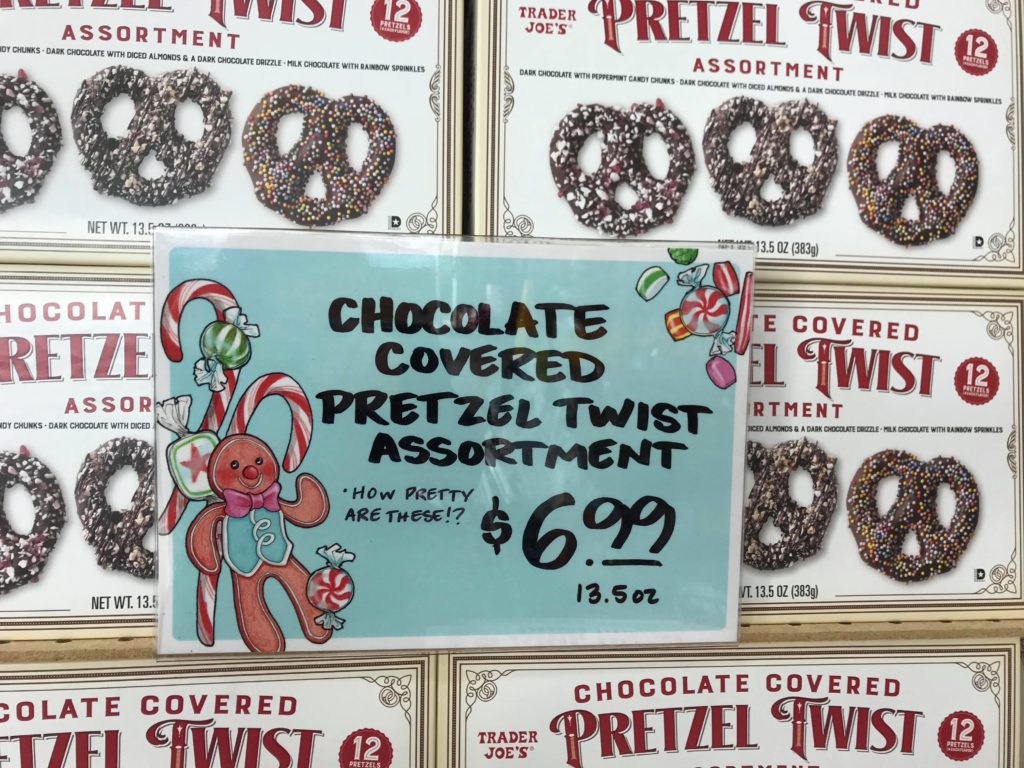 Chocolate Covered Pretzel Twist Assortment for $6.99. Really, there are so many things that would make beautiful, tasty gifts right now at Trader Joe’s! 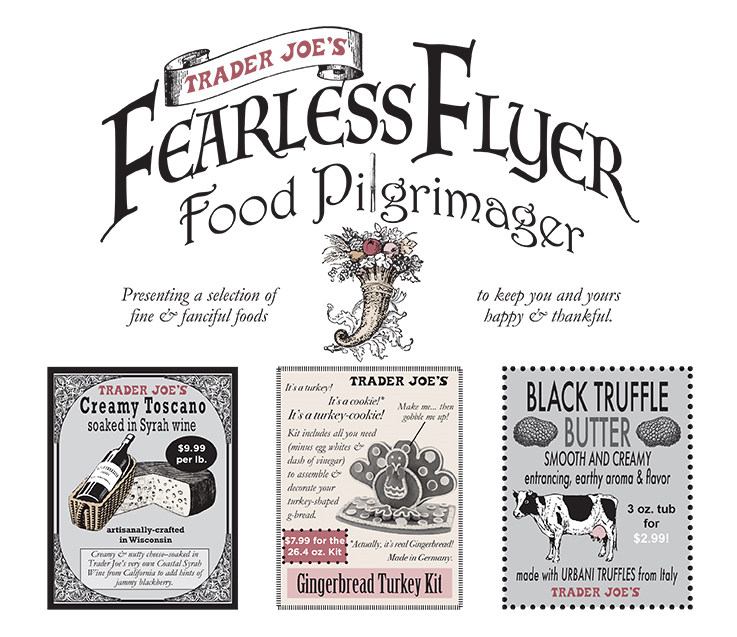 Trader Joe’s has released the November Fearless Flyer, and as I suspected, it’s chock full of holiday yumminess! Instead of listing out every.single.item from the Flyer, this month I thought I’d simply highlight what’s standing out to me as particularly delicious-sounding.

Without further ado, here we go! 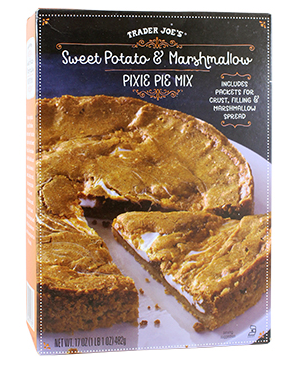 This is described as “somewhere between a brownie and pie in texture” and contains everything you need for the crust, filling & marshmallow spread. 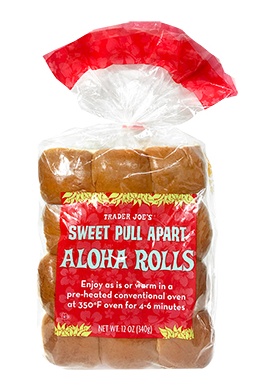