For the past week, I’ve been exploring traditional and/or forgotten recipes from Christmas past. One traditional meal is a roast goose served with chestnut stuffing.

Now I decided to put a spin on this meal by using cornish game hens instead of the goose. I thought it would suit my family better. But I decided otherwise to prepare the glaze and stuffing in a traditional way. I found a great recipe at Food Network.

I started with the stuffing. And to my dismay, it seemed that many traditional recipes are in fact, made with roast chestnuts. After my chestnut incident from last week, I wasn’t too keen about tackling this ingredient again. However, I put on my big girl pants and decided to do what needed to be done for the sake of this series. 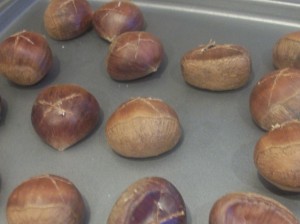 I repeated my recipe from last week, carefully scoring each chestnut. I roasted them in a 425° oven for about 25 minutes, until they split. This time, I used a nutcracker to help split them open, and worked hard to peel not just the outer shell, but the inner shell. When I couldn’t get them out perfectly, I just scraped the inside out (since it’s all getting chopped anyways). I did a little better than last week, but not much. I think if I practiced a few more times, I *might* improve. 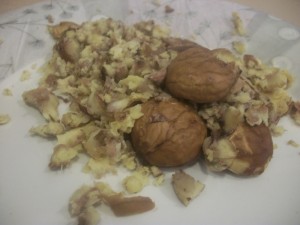 Now the original Food Network recipe calls for 3 cups of chestnuts, but seeing how I arrived with about 1 1/2 cups, I just halved everything. 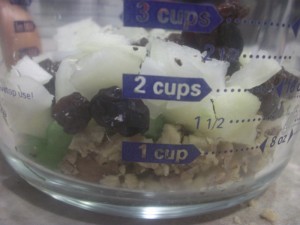 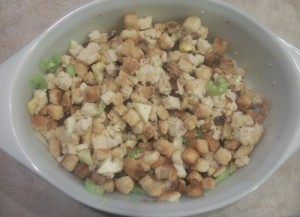 So here’s how I prepared my hens. Which, by the way, I found in the frozen section of my Fred Meyer store for $3.49. I have no idea what a good price is for these, or where you might get them for less, since I’ve never ever purchased them before. I just thought they’d be sort of cool for this recipe. (If you cook these regularly, speak up here.) 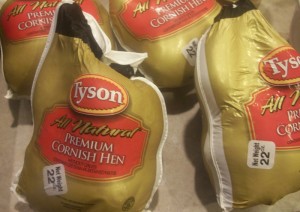 I made a basting sauce following the recipe: 1/3 cup corn syrup, 1/3 cup cane syrup (I just melted some sugar in a little water), 1/3 cup melted butter, 1/4 brown sugar, and 2 tablespoons of brandy. This is a very thick, sweet syrup. 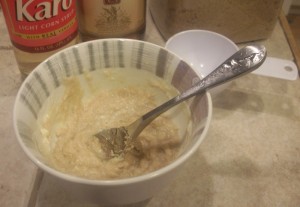 To prepare the hens, I simply rinsed, then patted dry with a paper towel. I put salt and freshly ground pepper in the cavity and then added 1/2 stalk of celery and some onion pieces in each. I placed them all in a baking dish, and topped with the basting sauce I’d just prepared. 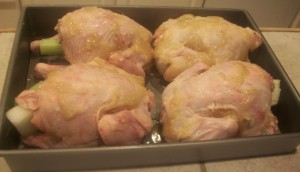 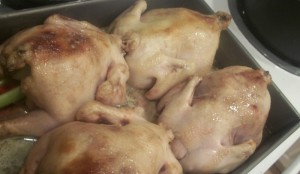 I placed back in the oven and cooked for another half an hour, basting one more time at the 45 minute mark.

When the juices run clear and the internal temperature reaches 165°, they are done! 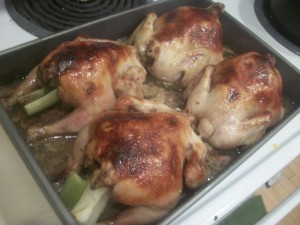 Let sit about 10 minutes prior to carving. 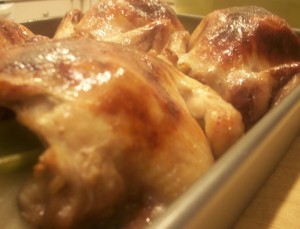 Here is my completed chestnut stuffing and glazed hens: 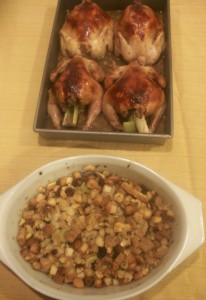 I served with the chestnut stuffing and a good dallop of sweet potatoes, mashed with brown sugar and cream. 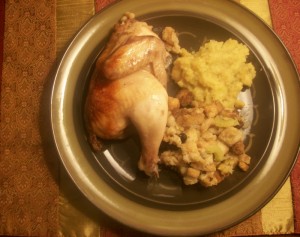 If you really wanted to complete this meal nicely, might I suggest roasted parsnip soup to start and mince pies with mulled wine to finish? And then, of course, you’d have to watch your favorite, version of Scrooge’s A Christmas Carol, I think. Preferrably an older one. Feeling Christmassy yet? 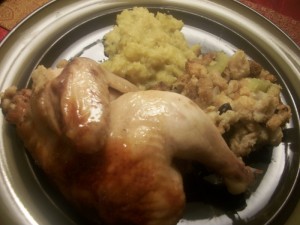 If you missed the other posts in this series, please check them out:

Tomorrow and Wednesday we’re going to do something a little different for this series by featuring vintage craft ideas. Get ready to be charmed.