Over the weekend, my daughter and I pulled out a book I purchased at Costco last summer (that’s largely been collecting dust on my nightstand):

It’s called 60 Hikes within 60 Miles of Seattle (that’s an Amazon link, in case you’re wanting to buy it yourself). We were hoping for a hike to do that we could fit easily enough into Sunday afternoon after church and before dinner and this book provided many options. We settled on Flaming Geyser since I’d seen the sign many times on our drive on Highway 18.

Of this park the guide writes:

“The words Flaming Geyser can’t help but evoke images of the spectacular hydrothermal vents at Yellowstone National Park, or perhaps spurting columns of lava, a little more likely to be seen in the volcanically active Cascade Range. Unfortunately, the geysers here are small, misnamed methane seeps, and their glory is limited, to say the least.”

Guilty as charged. I was totally imaging something like this: 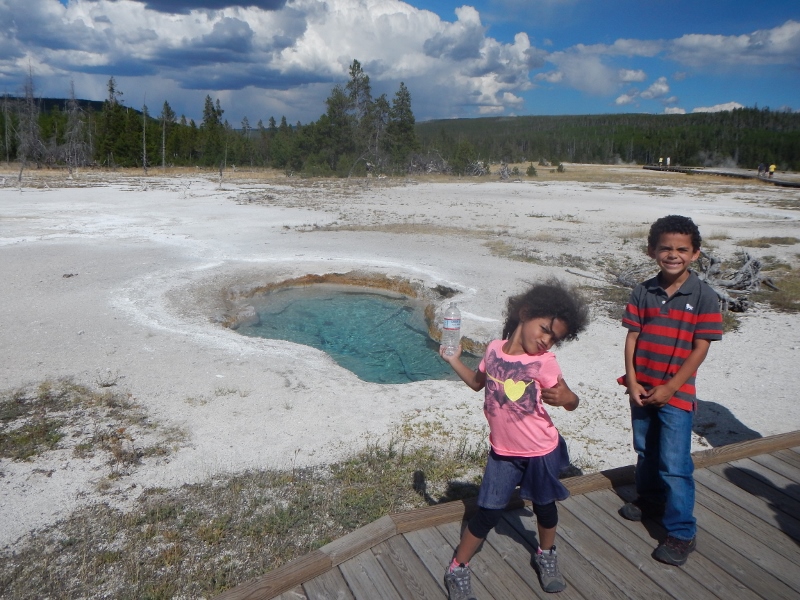 And instead we arrived to find this:

Um, what?! We named a State Park after this?!

After spending 1.5 seconds observing the “geyser,” my daughter and I decided to explore some of the trails, which thankfully, had more to offer.

We followed a short hike up a trail to Bubbling Geyser. The trail was all moss and fern covered and made for a lot of “oooohs” and “aaaaahs.”

It also made for a lot of terrific photos and I had a hard time setting my camera down!

Next, we followed a couple short trails along the Green River.

There are a few places where the trail will take you just to the river’s edge.

One of the difficulties of the trail was that it was quite… wet and muddy. If you go this time of the year, I’d encourage you to wear thick boots or big shoes. I saw a few people wearing not-so-great hiking footwear. Not fun.

Of course all that moisture does lend itself to some pretty cool plants, like skunk cabbage. Say what you will, but I think this is one stinkin’ awesome plant.

I also noticed quite a few large, beautiful Western Red Cedar trees throughout the Park.

Unfortunately, we were unable to make it down the entire length of the river trail due to downed trees. (According to my GPS we made it most of the way, however.) I’d imagine some of this may get cleaned up as we move into warmer months. (Plus, you’d be dealing with a lot less mud!)

All in all, we hiked about a mile and a half and on pretty easy trails. I’d give them two thumbs up for being kid friendly, particularly if you went in the summer when it’d likely be less muddy.

The forests, streams, and river are all beautiful to see and you don’t need to walk out very far to get a nice sense of them.

After this hike, my daughter and I decided to make an effort to explore some more of the trails in that 60 Hikes within 60 Miles of Seattle book I mentioned at the beginning of my post. She even decided to start a journal to write some of her memories about each place we visit along with a rating system.

Here’s what we thought about Flaming Geyser: while it was certainly pretty in spots, the trails were way too muddy for our taste today and we weren’t able to hike for as long or as far as we’d hoped. The geyser itself was definitely a disappointment. We liked the short hike up to the Bubbling Geyser and agreed that was the most scenic portion of the trails there. On a scale of 1-10, my daughter gave it a 4 (wow, she’s not joking around, is she?). I’d probably put it around a 5.

I should mention that if you plan on going here, you will need a Discover Pass as it is a State Park. Heads up. (Or just visit on one of the fee-free days.)

I’ll do my best to write about some of the additional spots we visit for hikes over the spring and summer. Have any you’d recommend we check out? Leave a comment below.

Other cool Puget Sound spots I’ve written about and recommend:

Share25
Pin15
Tweet
40 Shares
Disclosure: the above post may contain affiliate links. When you make a purchase or take action using these links, the site makes commission. For more information, please see my Disclosure Policy.