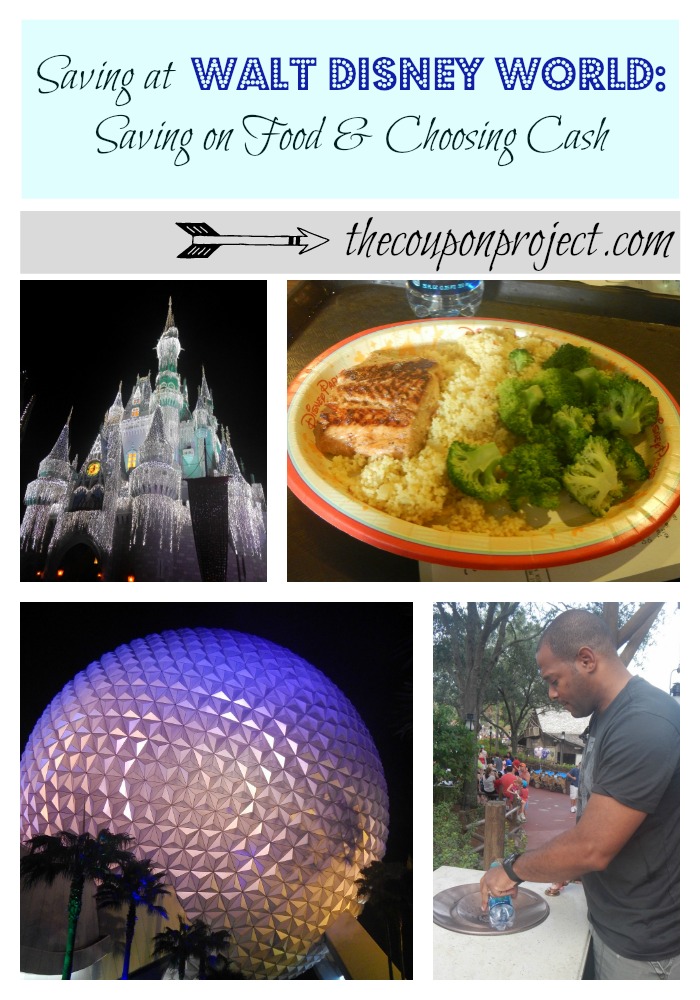 Yesterday I shared how we planned for our Walt Disney World trip along with some ideas for saving on park tickets. Today I’d like to spend some time talking about how we saved on food, why we primarily used cash on our trip, and a couple mistakes we made (that maybe I can spare you of!).

Walt Disney World park tickets are expensive with a capital “E!” They accounted for more than a third of our total vacation cost. But eating in the parks can prove to be quite spendy as well! The Unofficial Guide to Walt Disney World (2014) (Amazon link) notes:

The largest increases since last year are in food prices, which are up around 11% compared with 7% for ticket prices. We think it’s easier for Disney to raise food prices because most families look closely only at the cost of transportation, lodging and tickets when pricing a Disney vacation.

Please be aware of this when budgeting for your Disney vacation! Don’t let this information scare you too much, though. You still can save money. Here are a few things we did:

#1: We made use of water fountains. Disney will let you bring in empty water bottles which you can then fill at water fountains which are located throughout the parks (look for them near restroom areas). Even better, we filled ours a few times at soda areas inside the cafeteria-style restaurants we ate at. 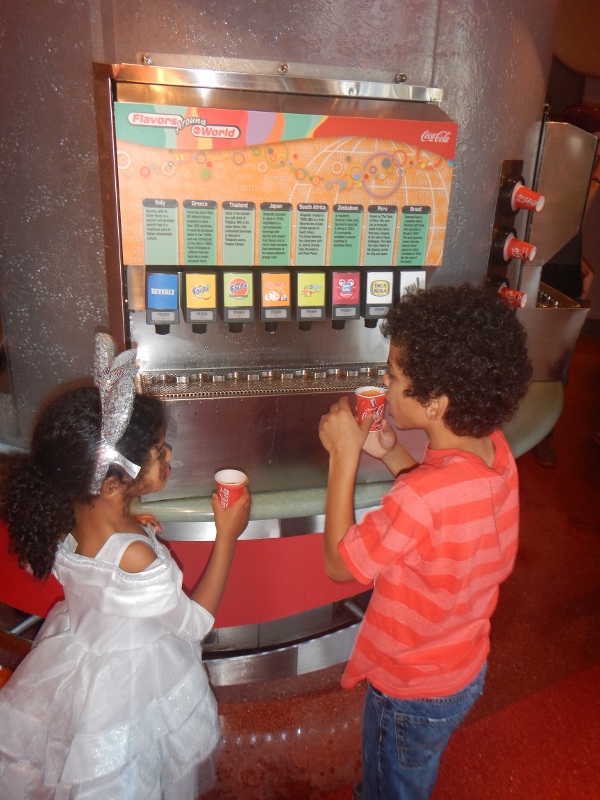 Here’s a bonus tip: try the Cool Club at Epcot. They offer up free soda samples from around the world. You can have as many as you like! This was a fun treat for our kids and we didn’t have to buy bottled soda.

#2: We brought in our own snacks. Now of course, you could go all-healthy and do nuts, fruits, and seaweed crisps, but hey – it’s Disney! We let our kids pick out a few candy treats at a nearby supermarket. This way, they still got something fun without having to pay the high cost. 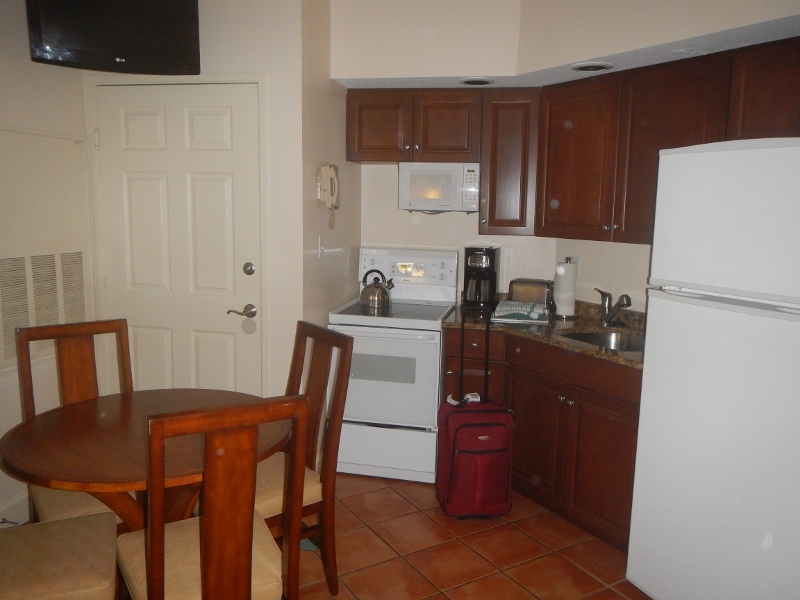 #3: We stayed at a Condo that had a kitchen. This meant we were able to enjoy a healthy breakfast every morning from the comfort of our hotel. I suspect it was also a time saver as we didn’t have to wait around in a restaurant. (Read how we got such a great deal HERE.) 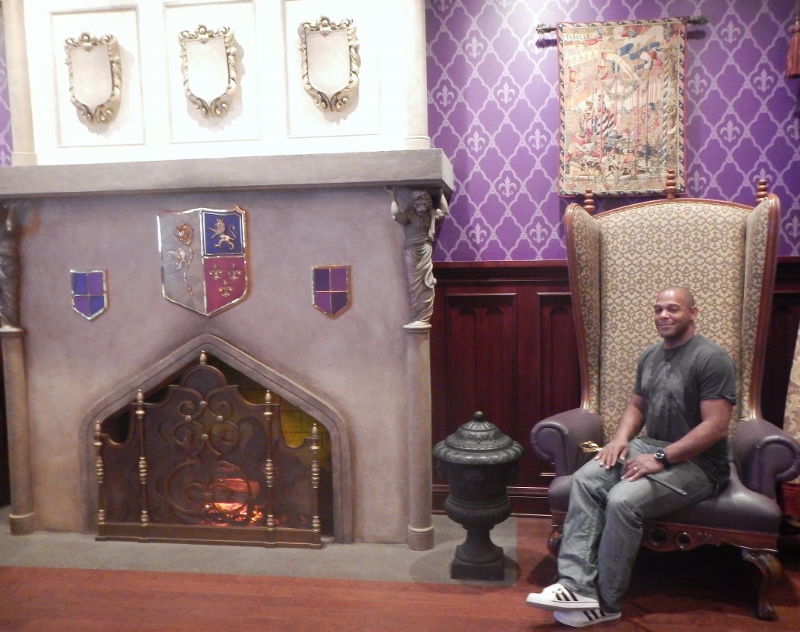 #4: We nixed a lot of “extras” when dining out. We still did enjoy eating in Disney, but were generally careful to keep the menu items to entrees (no drinks or desserts). Conversely, you could spring to pack in a lunch and then eat at a Disney restaurant just for the dessert. The beautiful Be our Guest restaurant in Fantasyland or the pastry shop in Epcot’s Paris would be excellent choices for a splurge treat. 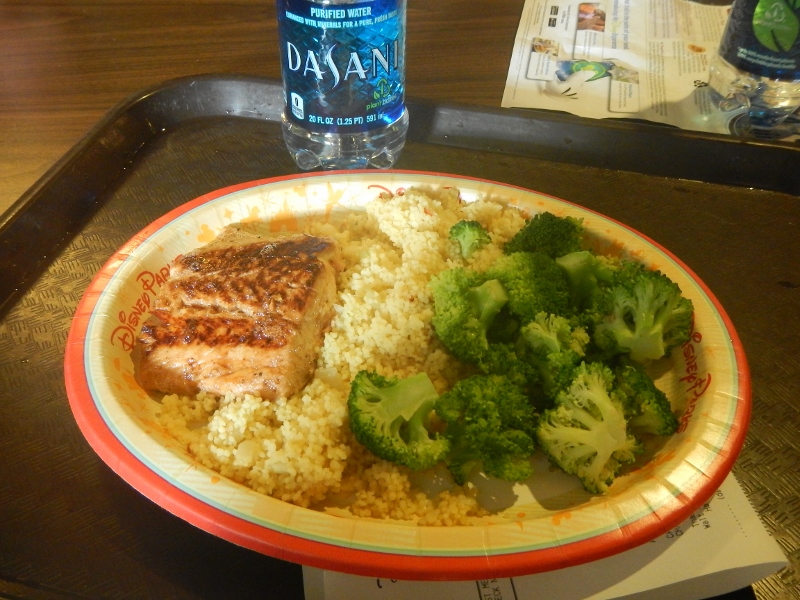 Incidentally, you might be surprised at the healthy options in the Parks – it’s not all fast food! One day I ate salmon, couscous, and steamed broccoli! The kids’ meals always seemed to include fruit or veggies (and sometimes both) and only ever had water, milk, or juice as an option (no soda). One day the fresh pineapple I found at a snack stand was toooo tempting for me so I caved!

Edited to add: after publishing this post, I crunched some numbers to see if the Disney Dining Plan at Walt Disney World is a good deal. Make sure to read up on what I found.

I’ll admit, I felt a bit strange whipping out cash in the parks when a good majority of people around me were using magic bands or credit cards. But here’s what I’ve noticed: Disney’s goal is to make it as easy and painless as possible to separate you from your money. (That probably just ruined my chances of ever being selected as a Disney Moms panelist, but there you go.)

Case in point: on a trip my husband and I took several years ago, we decided to take advantage of the “convenience” of charging everything to our room key. It was so easy and fun! But guess what – four days later we’d run up over $900! Suddenly, not so fun. 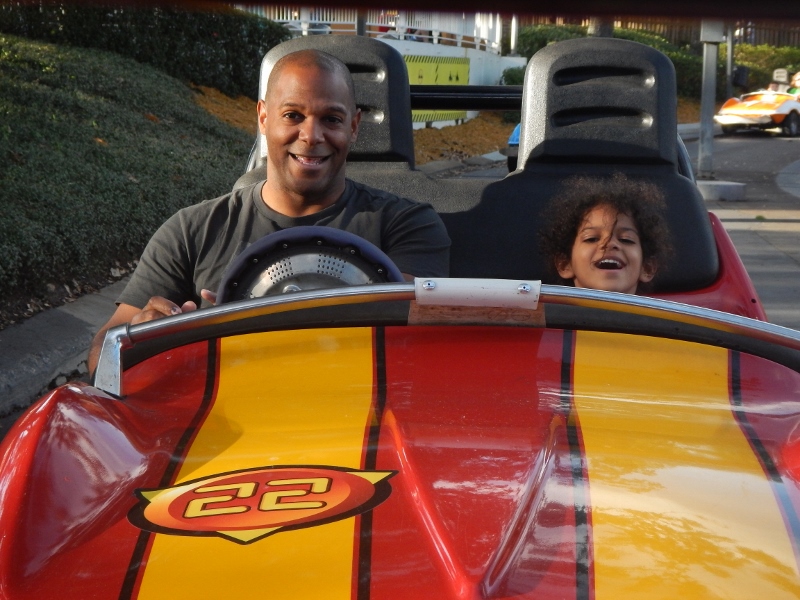 This time around, things went so much better for us and we were able to stick to our budget because we used cash! Every day, we took out a portion to bring with us so we weren’t lugging the entire amount around. I feel that using cash helped us make smarter choices on this trip. Which isn’t to say we didn’t have some serious splurges! We finally got reservations to Le Cellier steakhouse in Epcot’s Canada and let’s just say – that place is NOT cheap. The next day, we ate much more simply. 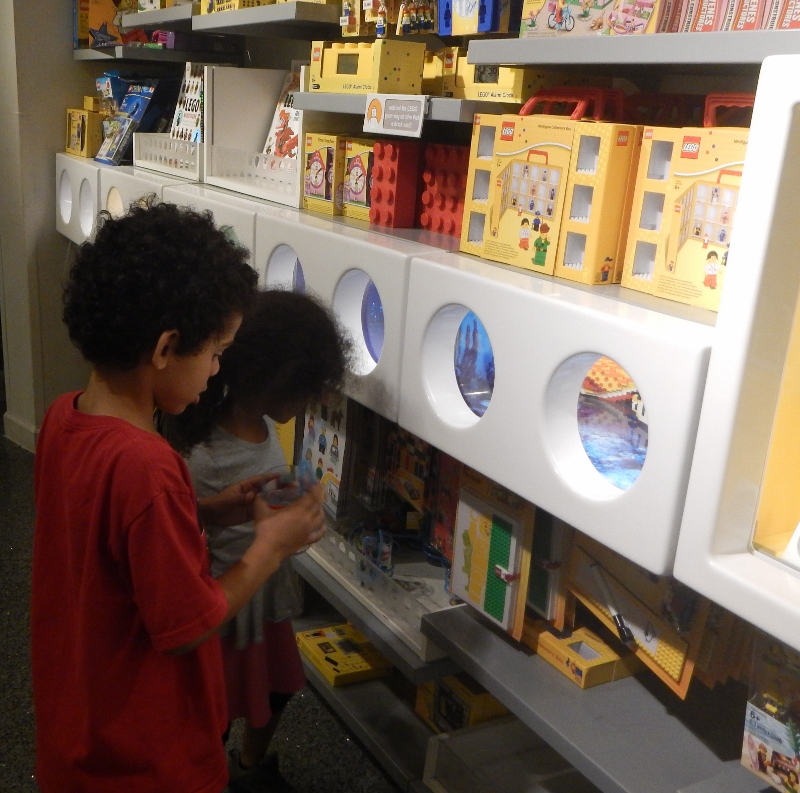 As far as souveniers go, we decided to give each of our kids a set dollar amount that would be their money to last for the duration of the trip. This eliminated begging entirely! I also think it was an excellent lesson for our kids. At one point after making a rather hefty purchase at the Lego store, my son broke down in tears. He realized that that even though he’d selected a great new toy, that his money was gone now. By the end of the week, I think my kids were getting a good sense of what things actually cost and the value of being smart with money choices. I would absolutely go this route again.

I know it’s probably sounding like we did everything perfect on this trip, but that’s not the case at all! Here are a few things I wish we would’ve done differently: 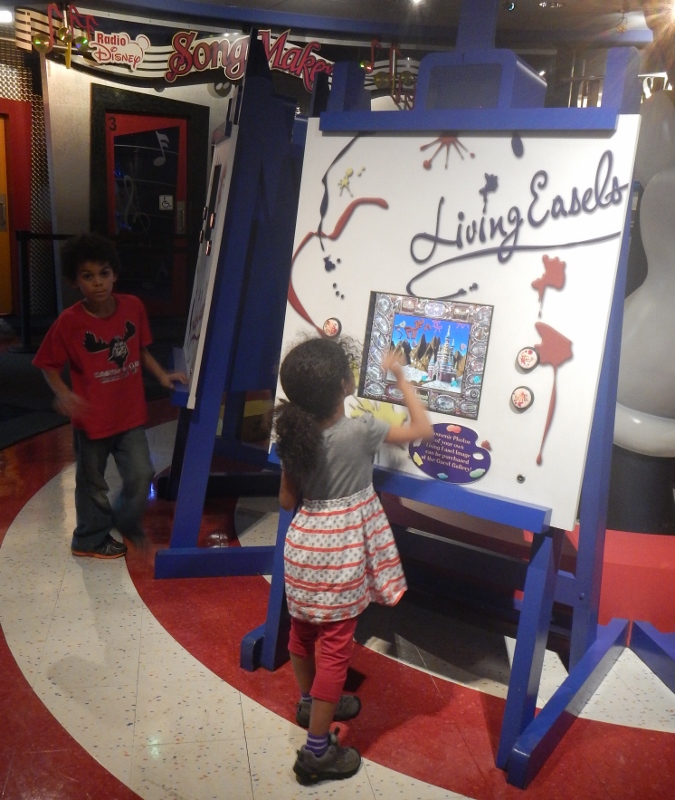 #1. Skipped DisneyQuest. My husband and I had been here before and LOVED it, but it turns out our kids didn’t love it as much. It was very expensive to get in and we only ended up spending a couple hours here. The first night in, we noticed they were offering 1/2 price admission for the last couple hours until closing. We should have bit then. Whether it’s DisneyQuest, a water park, or some other attraction, take the time to research ahead of time what’s there, the cost involved, and what other people are saying who have similar families to yours.

#2. Skipped PhotoPass – or used it differently. We did PhotoPass in Disneyland and LOVED it. It’s a card you carry around and whenever you see the Disney photographers, they’ll take your picture (usually in front of some park landmark) and load the pictures to your card. At the end of our Disneyland trip, I paid about $75 to get the downloads for all the pictures of our trip. While that’s a bit high, I was definitely happy to pay that amount to have access to all those photos. You might imagine my shock when I went to register our Walt Disney World trip to find that the cost is a whopping $169 for all the downloads (or $14.95 for just one)! 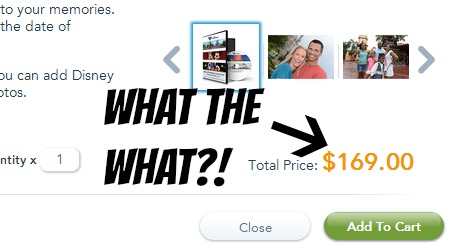 Now I’m faced with a difficult choice: do I pay the price and have all those photos or not pay and then have them go away? I’ll probably end up paying just because many of those shots we don’t have on my camera.

What I should have done is taken the time to research this cost ahead of time. Knowing what I know now, here’s what I’d recommend:

Option A: Skip Photopass and bring your own camera or use your phone. Just ask the photographers to take your family’s photos using your camera instead of a photo pass.

Option B: Use Photopass sparingly. One download will put you out $14.95, so perfect if you only really want an extra nice shot of your family in front of Cinderella’s Castle (and then use your own camera or phone for the rest).

Option C: Use Photopass like it’s going out of style. If you think you’re going to end up buying all the downloads, rack that baby up with photos. From what I can tell, it doesn’t matter if you have one photo on there or 100, it’s going to cost you the same (someone do correct me if I’m wrong!). You’ll feel better shelling out the bucks if you have lots of great family photos on the download instead of just a few.

As I shared in my post yesterday, I think you’ll have a more enjoyable time of Disney if you focus on saving FOR Disney instead of saving AT Disney. While we got killer savings on some of the components of our trip, we also made a few splurges, too – such as our Le Cellier dinner and a sweet wooden Mickey nutcracker I couldn’t live without. 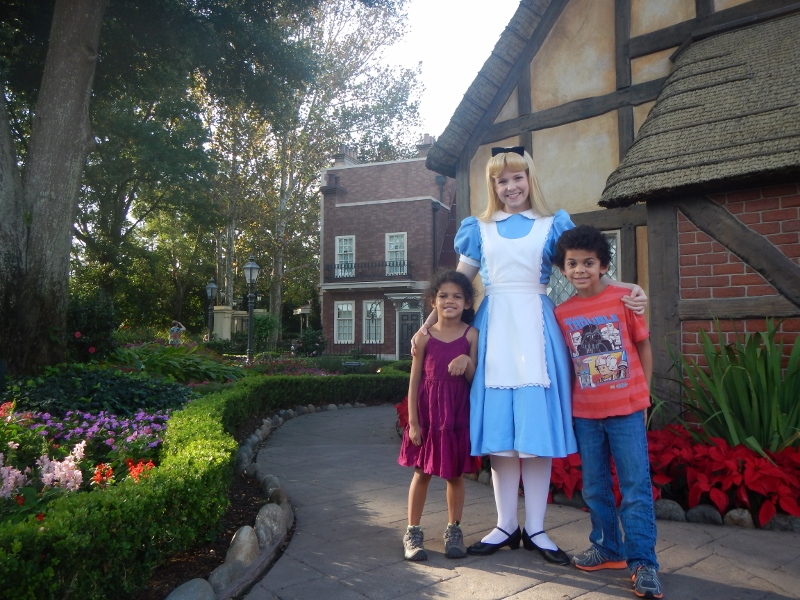 Why even bother? It really just comes down to choices, doesn’t it? My husband and I have decided to put a high value on family vacations. This has meant we cut back in other areas. Your family may have a different goal, and that’s OK too. The benefit of saving money in some areas (groceries, anyone?) is that you can spend money in other areas. Thanks for letting me share my trip and thoughts with you!

What tips do you have for saving on food at Disney?

What money traps do you think folks need to be wary of at Disney?

Can you think of a money success or disaster you had on a Disney trip?

9 thoughts on “How we Saved on our Walt Disney World Trip: Part 2 of 2”