Today’s Please Pass the Fruitcake post is the recipe that originally inspired this series: fruitcake. I’ve never made a fruitcake before, but I do enjoy eating it (seriously, why the bad rap?).

Let me tell you this, having now made a fruitcake. If someone gives you one as a gift, you need to appreciate it as such. Making a fruitcake is no small undertaking and requires many ingredients and much patience. So please don’t huck it out the window or use it as a paperweight – savor it, and shower the giver of the cake with many kisses.

Sarah found me an awesome-sounding fruitcake recipe so I set to work. I found the ingredients I needed at WinCo. Would you believe they had most of the candied fruit varieties I needed in bulk? Yes, it’s true! 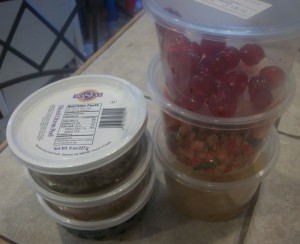 Dump all of the fruit in a bowl with 1/2 cup orange juice and 1/2 cup brandy. Here’s another trend I’ve noticed about all these old Christmas recipes. They all call for brandy. The figgy pudding, the brandy butter on mince pies, the mulled wine, and the glaze for the Christmas goose – all brandy. No wonder everyone was so “merry and bright” back then! 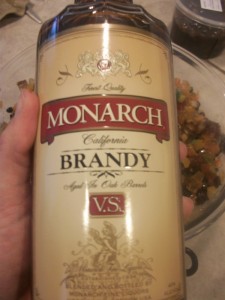 OK confession time. This smelled soooo good, I wondered what one of these fruit bits would taste by itself. Yes, I did it. I tried one of the green cherries. It was…TERRIBLE. Don’t do this people. You’ll swear you’re eating something you shouldn’t be. I had to step out for a bit of fresh air because I was feeling sickish afterwards. 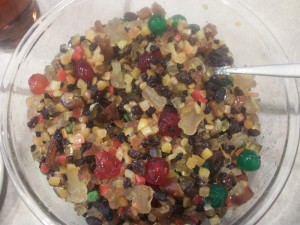 From here you’re going to want to let the dried fruit soak in all the orange-brandy-ness for several hours. Oh, and get used to the notion of doing a step and then waiting several hours/days until the next step. Kind of reminds me of my sugar plums (they are currently on day 11, I think).

Now you can prepare your loaf pans. This recipe is enough for two large loaves. You’ll want to butter the sides well, cover the bottom with parchment, and yes, butter again. 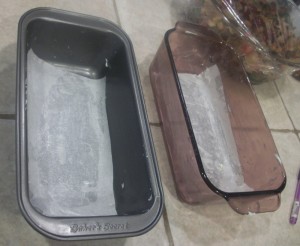 Now you can begin to work on your batter, which consists of 3 1/2 cups of flour, cinnamon, nutmeg, cloves, allspice, and mace. Sift (or in my case, just stir ‘cuz you don’t own a sifter), then add the baking powder and sift/stir again. 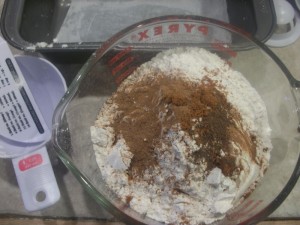 Now this is the part you are going to start to mix 1 cup of butter in a mixer. I’m gonna warn you now – get a heavy duty stand mixer. I’m not saying this to try to sell you something you don’t need – I’m just saying – this batter is a beastly monster. If you attempt to stir it by hand, you’ll break your stir stick (and/or possibly your arm). If you don’t have a heavy duty mixer, borrow one. As it is, my Kitchenaid was probably saying, “and what the booger is THIS, Angela?” as it was working overdrive to slog through it all.

OK. You’ve been warned what’s about to happen.

Add two cups of brown sugar to the butter. 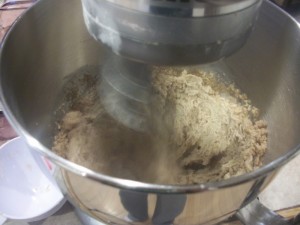 Beat eggs slightly then add them to the mixture. And then slowly work in your flour mixture. Once that’s thoroughly mixed, slowly pour in the molasses. 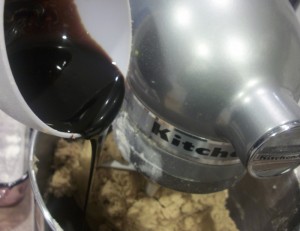 Now comes the fun part. Mix in the fruit. This pretty much filled my mixing bowl up to the brim. I’m pleased to say that my Kitchenaid pulled through. (Though it didn’t speak to me for at least a few days after this incident.) 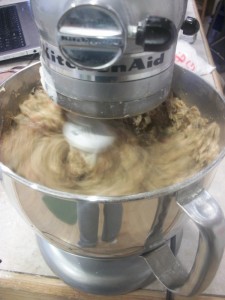 Next you’re going to beat the egg whites until soft peaks form. 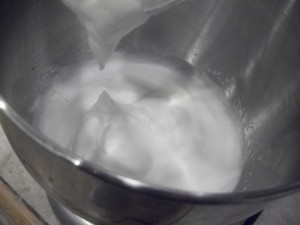 Fold into the batter and then pour into the two loaf pans. 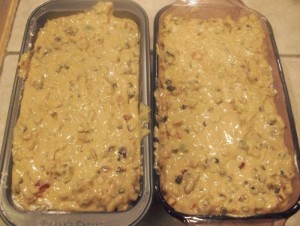 Then you’re going to cover these and let them sit in a cool place overnight. I opted for a place in my garage.

Oh, an hour and a half into it, you’re going to put each of these into a brown paper bag and finish cooking. If this recipe isn’t high maintenance, I don’t know what is. 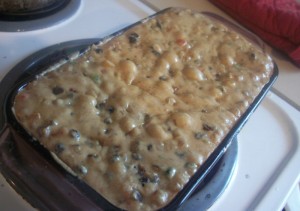 Now, I suppose you could slice it up and eat it right now, but typically, that’s not what happens. Oh no.

You need to take it out of the pan, wrap it in parchment, AND foil, AND put it in a tin of some sort, and poke holes in the lid of the tin so it can breathe, and THEN give it somewhere cool to chill and THEN every 3-4 days before Christmas you drizzle a little brandy on top of it.

I hope you understand now why you should be forever in your Aunt Cecilia’s debt when she gives you a homemade fruitcake for your Christmas present. She has given you a labor of love. (And some rather spendy ingredients, I might add.) 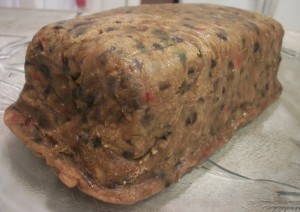 Here’s my fruitcake, about a week and a half after I started the process. I decided to take a tiny taste today, but I fully intend on blessing my family with it at our Christmas Eve party this year. Just keep boozing it up, and it should be good, I guess. 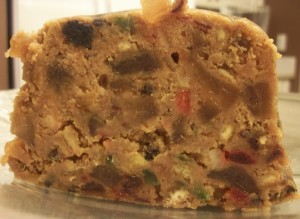 That’s what the inside of my fruitcake looked like, once I sliced into it. Observe the Christmas colors. 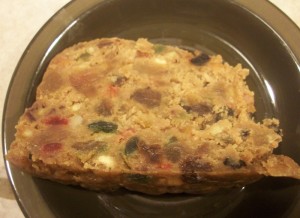 And there you go! A slice of Christmas Past (sometimes quite literally), ready to be enjoyed.

I asked my daughter to capture the moment of my first bite of my fruitcake. I should remind you, she’s three, so this is pretty fantastic photography. 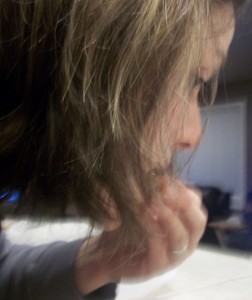 I loved it. I should tell you that a LITTLE goes a long way when it comes to this cake. I wouldn’t recommend serving a huge ol’ slab of it. I would even consider serving half slices or cubes. It tasted like I was eating a cake made out of fruit snacks and butter. I gave my son a nibble and a minute later we had to fish out the dental picks. (He’s fussy about these sorts of things.)

So there you have it my friends. Fruitcake.

Tomorrow I will conclude this series with the strangest recipe I’ve ever featured on this blog. Those of you that chill with me on Facebook might remember a couple of weeks ago I said I was laughing so hard I was crying about an idea I had for this series. Yes, my friends. My idea worked beautifully. And tomorrow I will share that masterpiece with you. Don’t miss it.

For past recipes in this series, just browse my Christmas category.

For the complete instructions on today’s recipe, visit About.com.