I’m running a 12-part Christmas series called Please Pass the Fruitcake. The goal is to rediscover classic Christmas recipes. In case you missed them, you can go back and read up on roasted chestnuts and yule logs.

Today we’re making sugar plums! Now I had no idea what a sugar plum actually was, other than children had visions of them before they went to bed on Christmas Eve. According to some research Sarah did, sugar plums could have referred to the process of preserving fruit in sugar, which was a relatively new concept back then. I decided to tackle this most traditional recipe, and which was originally penned in Old English – yes, it’s that old.

Take your apricocks or pearplums, & let them boile one walme in as much clarified sugar as will cover them, so let them lie infused in an earthen pan three days, then take out your fruits, & boile your syrupe againe, when you have thus used them three times then put half a pound of drie sugar into your syrupe, & so let it boile till it comes to a very thick syrup……. (you get the point)

Here’s the other thing that’s funny about this recipe. DECEMBER IS NOT THE TIME TO BE BUYING PLUMS. No wonder those kids had visions of them! I had no luck at WinCo or Fred Meyer and then I remembered – which grocery store has pretty much every kind of produce out there? – oh yes, H Mart. They didn’t disappoint. 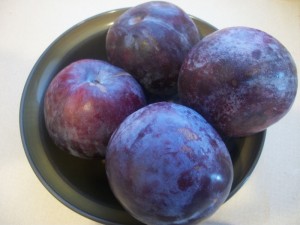 Wash, pit, and halve the plums but don’t take the skins off. They’ll help keep the shape of the plums while cooking. According to the original recipe, most of the skins will fall off in processing anyhow, and can be easily removed later.

Put some sugar in the bottom of a heavy saucepan, and lay the plums on top. If you have lots of plums, you can layer sugar and plums until covered. Now this is the part that was strange to me – there is NO water involved. You just put them on a low heat until the sugar gets dissolved. The other odd part is that the original recipe has no indication of how much sugar other than a lot. I guess those Old English folk just had some sort of understanding about these things. 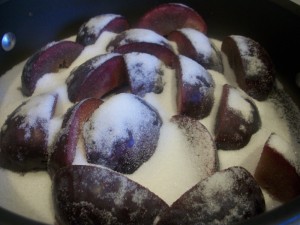 Gently stir the sugar so it doesn’t burn, and take care not to disturb the fruit. 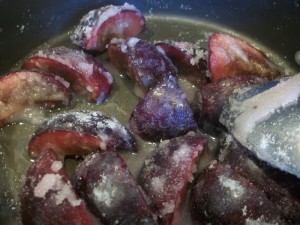 When the sugar come to a boil, cook for one minute more. Don’t let it boil hard though as it could break up the plums. Finally, remove the plums with a slotted spoon to a shallow glass dish (I used a pie plate), and then spoon the syrup on top. I found that I didn’t have a ton of syrup, so I made a little more by boiling equal parts water and sugar together for a minute. 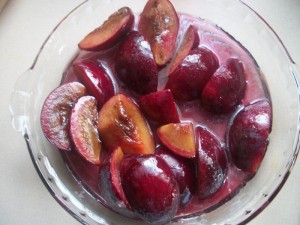 Now here is the part where you realize it would’ve been nice to have actually READ THE ENTIRE recipe through before starting. See, in three days I need to repeat the processing of boiling and putting back into the plate and then wait ANOTHER three days after that and repeat, for a total of NINE days just to process it! At first I was dismayed, but then I thought – oh well, I’ll just put this particular recipe towards the end of the series. But no. That’s when I read the last part – that after processing, you need to dry the fruit out on a wire rack and that could take up to two weeks! So I’ll have to update you on the status of this project at a later date.

And somewhere along the line I also suspected that I’m just making prunes. Sort of a Christmas bummer. (But if you’re interested, there’s a clearer explanation at TLC.)

The good news is sugar plums can also refer to a kind of candy you can make. And it takes less than three weeks to make, so score! Sarah found today’s Sugar Plum recipe at Saveur. 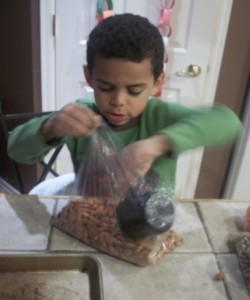 While that’s cooking, mix the honey, orange zest, cinnamon, allspice, and nutmeg. It will smell delicious! 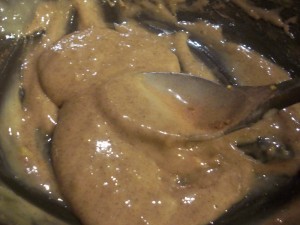 I had my kids help with this recipe. I just have them take turns so all’s fair. 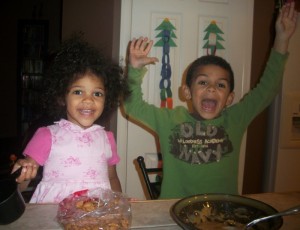 Next you need to finely chop your almonds. I don’t own a food processor and my coffee grinder ground them a little too finely, so here’s my in-a-pinch-and-without-a-food-processor solution. Ready? 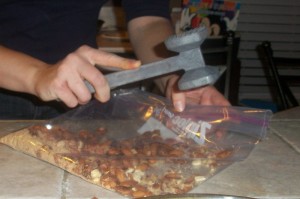 Yup. I put them in a Ziploc bag and bash the heck out of them with a meat tenderizer. Remember to use the flat side. If you use the pokey side, you’ll have a mess. If you don’t have a tenderizer, you could use a hammer, soup can, or any other blunt heavy object. (These are things they don’t teach you in your Home Ec class).

Now mix the almonds, apricots, and dates to the honey mixture. Things will be…sticky. 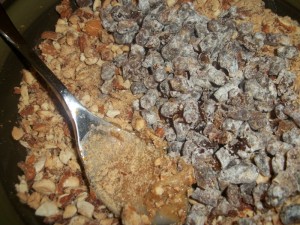 Next, you make little balls and dust them in powdered sugar. Now I found my mixture was a little bit crumbly, so I ended up adding more honey to make mine work. Here is the finished product. 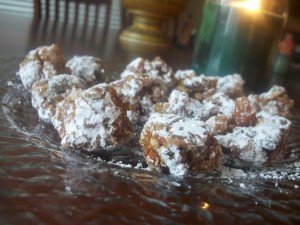 These were VERY tasty! They had a distinctive sweetness and crunch, and I think they’d be wonderful to bring to a holiday party! According to the recipe I found, they’ll do best stored in an airtight container in your fridge. The flavor will improve in a few days, and you can store them for up to one month.

Join me tomorrow for yet another feature in this series!