I’m well into my Christmas series entitled Please Pass the Fruitcake! Every day for 12 days I’m featuring an old Christmas recipe or tradition. In case you missed any:

Today we’re going to explore more Christmassy beverages! First, I wanted to try my hand at making wassail. Have you ever wondered what wassailing was? Well, it’s an old tradition where the purpose is to wish for a good crop of apples next year’s harvest. From what I found on Wikipedia, doesn’t sound terribly Christmassy to me, particularly because apple season is fall, not December.

Regardless, apples are an essential part of this beverage. When I think of wassail, hot apple cider definitely comes to mind. However, the medeival version was made with wine and ale. I decided to try a traditional recipe.

I consulted my pal Alton Brown who’s usually right on the money when it comes to creating authentic recipes. The other bonus about his recipe? It comes with a 3-minute instructional video! Since it was just Sarah and me cooking, we decided to halve the recipe.

Start by coring small fuji apples and filling with brown sugar. Bake at 350° for about 45 minutes or until tender. 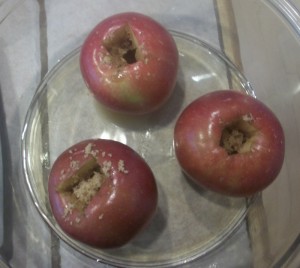 While those are baking, add your wine and ale to a slow cooker. Now, I admittedly don’t know beer too well, but I noticed an I.P.A. variety at the store said “ale” on it, so I was like – sure, that’ll work. This might have been the beginning of the end.

You’ll also take some spices – cinnamon sticks, whole cloves, ground ginger, ground nutmeg, and whole allspice berries – into a muslin cloth and throw it in. If you don’t have a muslin cloth, you could use a tea ball or something similar. We actually rigged a bag using a piece of clean dishtowel and dental floss. 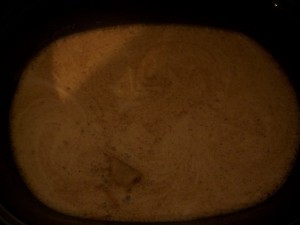 Next, separate some eggs. Work on the egg whites with a small hand mixure. Sarah said she couldn’t remember ever having done this, so I took a photo to commemorate her beating egg whites.

Then, you will beat the egg yolks until frothy. Then slowly work the mixture together.

Temper part of the hot wassail into the egg. 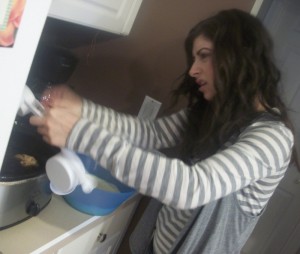 Sarah trying to make sense of this confusing recipe.

Once you’ve mixed a little of the wassail into the egg mixture, you put the entire egg mixture into the pot. Add the apples, and viola. You’ve got wassail. 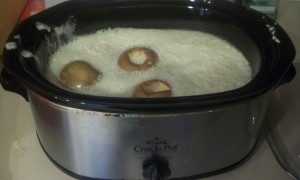 Sarah’s apples even floated to the top – I was so impressed!

There was only one teeny tiny problem.

While the idea of this recipe is…interesting? The result tasted like a very, very bitter beer. I’m not a fan of bitter beer. Nor was Sarah. I would love to hear from any of you that have made this type of beverage before. Did I make it correctly and it just tastes terrible? Or, should I have selected a different kind of beer? Thoughts?

We didn’t let the fail stop us though. Sarah found another recipe, which sounded much more promising for mulled wine, so we decided to try that instead and comfort ourselves from the terrible wassail. 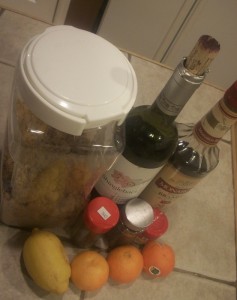 Here are your ingredients:

This recipe is so easy. Just slice up your fruit. 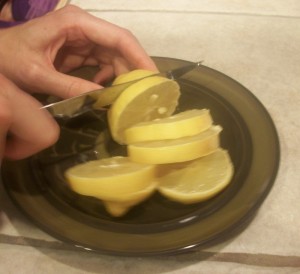 Then, throw all the ingredients into a saucepan. 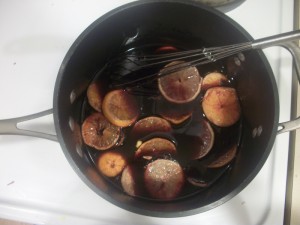 Heat for about 15-20 minutes and serve. That’s it! You may wish to strain to remove the fruit pulp and spices. We decided to leave ours pulpy.

OK, I loved this drink. LOVED. It reminded me of a warm sangria! Just the right amount of sweet, with the Christmas spices nicely flavoring it. I would make it again. (In fact, I’ve already made it a second time it was that good!)

Join me tomorrow when I’ll be recreating a traditional Christmas main course!