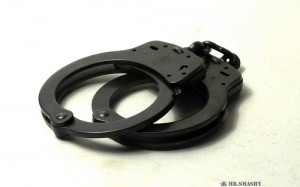 WARNING: In case you don’t share my dry sense of humor, some of the advice may or may not be in jest. Huge grains of salt may be required for swallowing with this post. Follow this advice at your own risk!

Last week, a concerned couponer left a rather interesting photo on my Facebook wall. It was of a woman in a grocery aisle – a “peeler.”  The concerned couponer said that if more people called her out, this thing would stop. While I agree that clearing all the peelies off products (or worse, hawking them on ebay) is a no-no, I wondered if this was the best way to address this situation. If nothing else, I thought it was a topic worth talking about, and I thought I’d share additional ideas for dealing with crooked couponers.

If you’ve followed me for any length of time, you know I’ve got some rather strong feelings about coupon etiquette and ethics. I believe that the actions of one can impact many others. I believe in befriending stores and manufacturers, and not treating them as our opponents in a game of strategy. I believe in sharing deals that will work for the majority of the folks, the majority of the time. I believe in sharing deals you can feel 100% good about – and that my store partners can feel 100% good about too. Etc, etc, etc. You feel me.

But what happens when you catch someone “in the act?” “Doing the deed,” so to speak? Rifling through unopened product for coupons, snitching coupon inserts out of unpaid Sunday papers, ripping off one-too-many peelies, or some other couponing no-no?

As I see it, you have four options. Let’s explore these, and the possible outcomes of each.

1. Confront them, head on. In this scenario, you let the crooked couponer know in no uncertain terms you’ve seen what they are doing and it’s wrong. This is what you might call the Direct Approach. If you are truly concerned about calling people out on their misbehavior, well then, this is probably the best way to do it. If you have some furry handcuffs laying around (*ahem*), you could tackle them to the ground and put them under Couponer’s Arrest and then phone up Bud from the CIC. There are a few possible outcomes for taking this approach. First, the person could become quickly apologetic and/or embarrassed and/or put on sackcloth and ashes and pledge to reform their ways. Second – and probably far more likely – the person could become cantankerous, defensive, and you’ve just found yourself in an argument somewhere between the pet food and paper product aisles. And I have a feeling it’s an argument that you may not win. (Unless you’re really quick with those handcuffs.)

2. The subtle “I caught you” glare. This might be the best option for the passive aggressives out there. No, you don’t want to engage this person in a battle, but you do want to let them know that you know what’s up. You have a few different ways you could do this. You might saunter past them and do a very loud sigh, or you could call your friend on the phone and say within earshot “wow, funny I can’t seem to find ANY of those peelie coupons you told me about!” You could shoot a few glares, or cough, or accidentally bump into them with your cart. Hard. This might help relieve the angst you’re feeling in the moment whilst avoiding a cat fight.

3. Out them publicly. Too scared to confront them directly? No problem, that’s what the camera feature on your phone is for! While pretending to grab a jar of pasta sauce, take a picture of the couponer mid-coupon theft. Now, what do with the photo? Of course you could share it on your Facebook’s wall, but what is that going to do, really? Particularly if you’re only one of a few friends you know that coupons. Most people won’t care. You could pass it around some forums or blogs, but even that may not get you the bang for your buck. My advice is to purchase billboard space and plaster that sucker all up and down the I-5 corridor. Imagine the shock and horror as the crooked couponer is commuting to work one morning and BAM. Probably the outcome you should be most wary of in this scenario is a lawsuit. So, you might want to have a lawyer on standby just in case.

4. Do nothing – or do something positive. Of course, after weighing all the pros and cons, you could decide to take a breath and just keep walking. You won’t have to fear getting produce hucked at you, getting sued, or worse. Here’s the other thing you could do: you could play by the rules, and maybe if you’re so inclined, tip off a cashier or manager (particularly if there is theft involved). You could also teach someone else to use coupons and make sure they understand how coupon policies work. You could also consider that what you thought you saw may not be really the full truth of the matter, either. (For instance, that person rifling through the Sunday papers may just wanted to be certain all the inserts were there before buying it.)

So before you take the Coupon Police oath, grab those furry handcuffs and hit the aisles in the name of truth and Coupon Justice, consider the cost first. Maybe in the end you’d prefer to be a couponer that plays by the rules yourself and encourages others to do the same. The possible outcome of that scenario? A whole lot of money saved and a big smile on your face.

Ever catch a Crooked Couponer? How did you handle it? Any other ideas you’d add to my list?