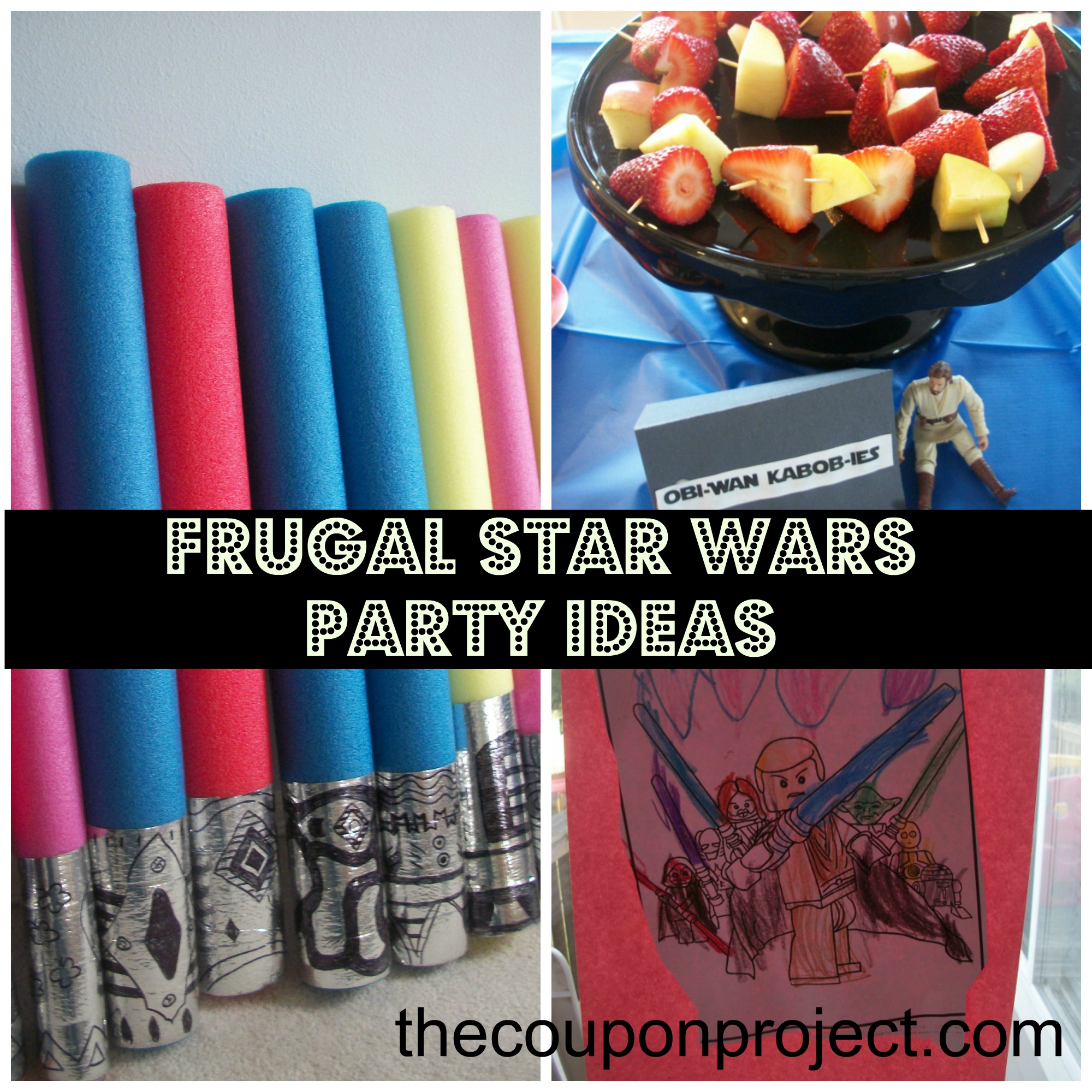 My son had a birthday recently and he’s very much into Star Wars. Pinterest supplied no shortage of fun ideas, so I selected a couple that stood out to me and came up with a few ideas of my own, too. While our theme is Star Wars, some of today’s ideas are easily adaptable to other themes.

So first, let’s talk decor! We did purchase a few hanging Star Wars decorations, but you know, I really hate spending lots of money on something you’re ultimately going to throw away! My son also wanted to be involved in setting up for his party so I came up with a FREE and fun solution: 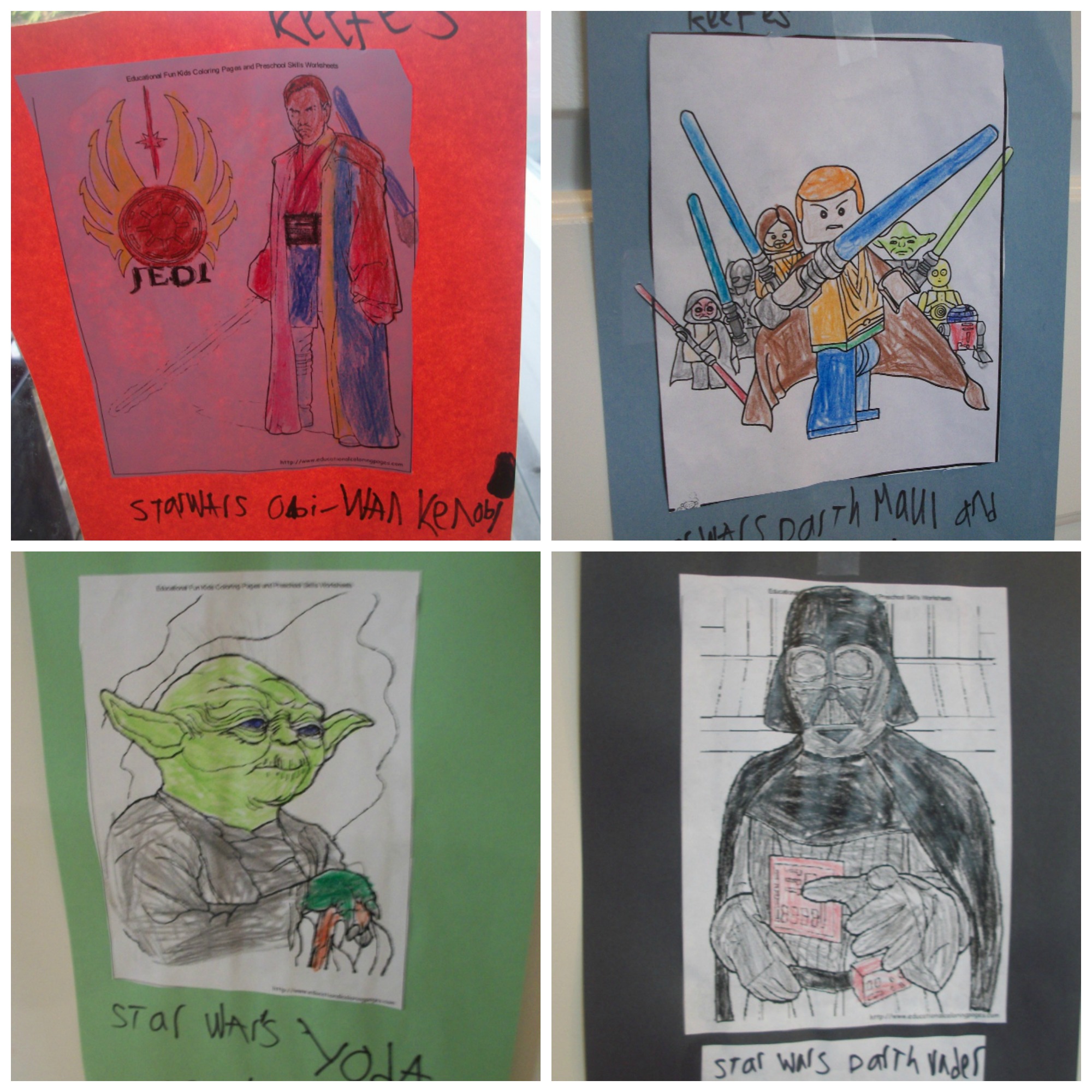 I started by Googling “Free Star Wars Coloring pages.” We located a few (here’s a good one for Star Wars), and printed them off. My kids had fun coloring the characters and then we simply cut and glued them to construction paper and hung them around the house. Of course, you could do this for just about ANY theme birthday party you’re doing – princesses, superheroes, trains, etc.

Here’s a bonus idea: print off some extras to have handy for your party guests and make a coloring station!

Next, I wanted to come up with a great activity. I’m not into doing lots of party games – I would far rather devote the time to coming up with ONE single awesome idea…. 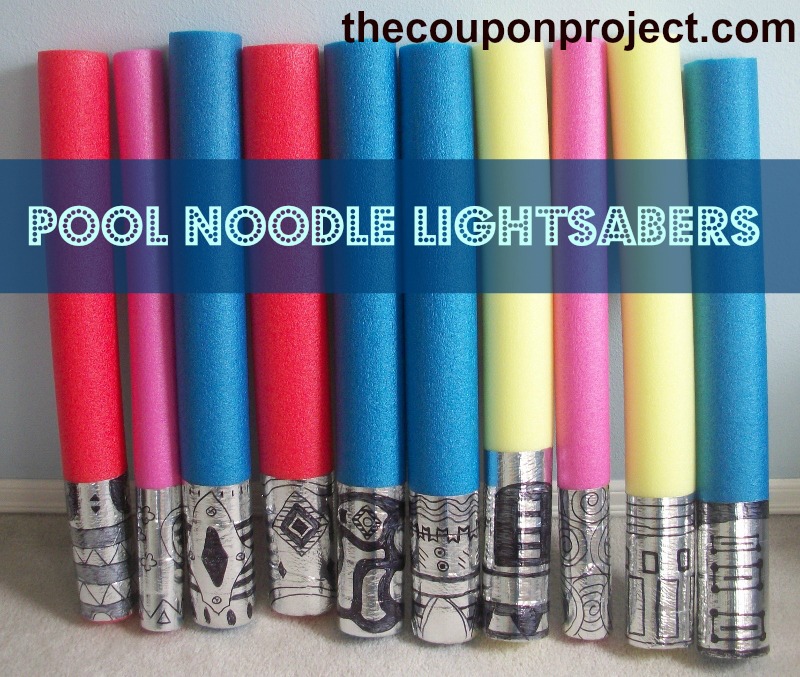 These pool noodle lightsabers were easy and inexpensive to make! I got the idea on Pinterest (from multiple blogs including here and here).

I found the pool noodles at Fred Meyer for $1.99 – $3.99 each (depending on how thick they were). I simply cut them in half (a big kitchen knife will cut through them easily enough). For the handle, I wrapped the end in silver duct tape (also found at Fred Meyer). When I asked my husband what I should draw on the handle using the Sharpie, he said, “here, let me do that…” and then proceeded spending a little *too* much time coming up with custom designs on each of the handles. (What can I say? The man’s a Star Wars fan himself!)

Some of the blogs I saw used black duct tape for the buttons and other handle components, but I’m kind of fond of my husband’s Sharpie creations!

Now…I decided to do something a little fun with these by creating a Jedi-themed scavenger hunt with the lightsabers as the final prize. 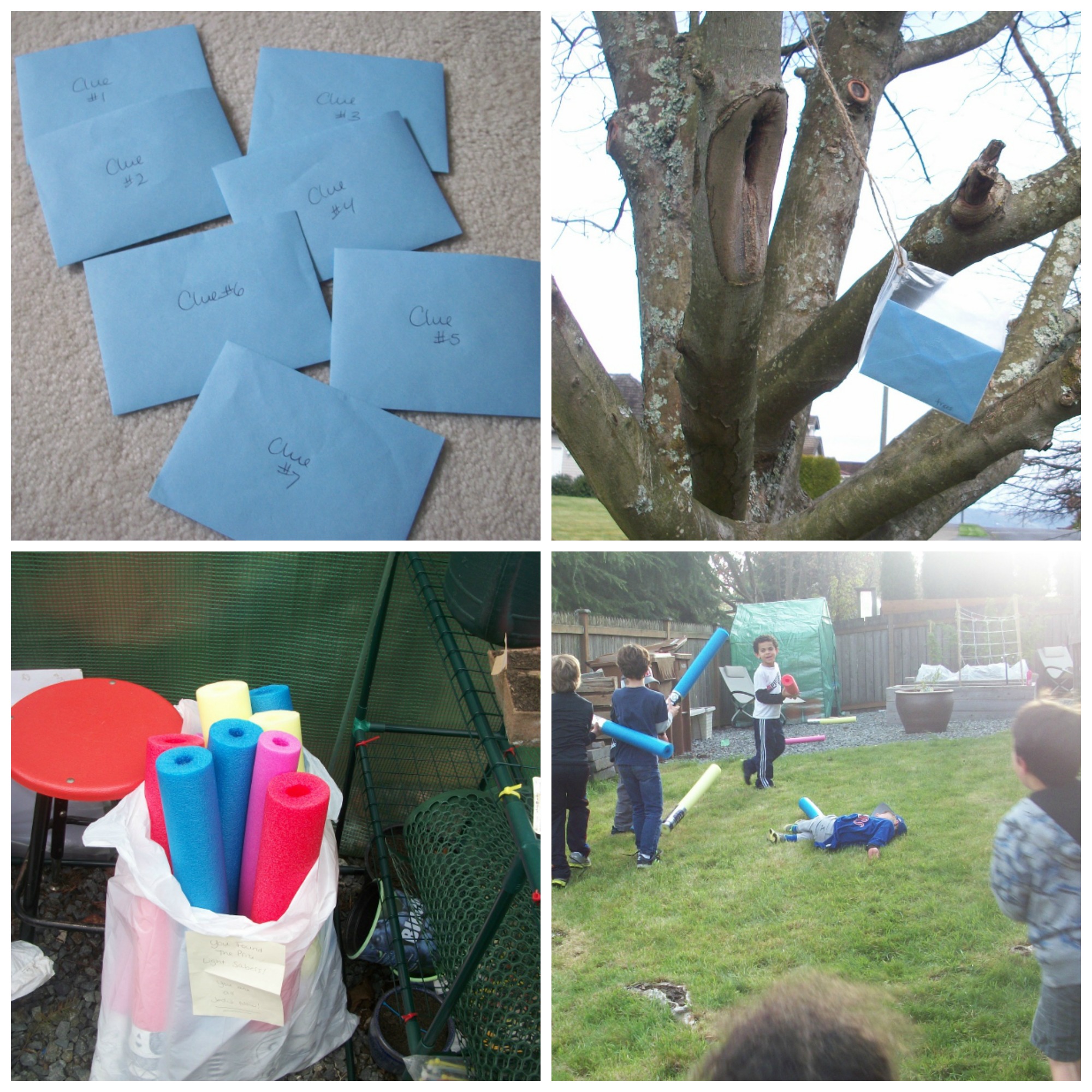 I made 7 clues and put them all in the same blue envelopes so the boys knew what to look for. Given the boys are still young, I didn’t want to stump them by making the clues too hard. So they were all pretty simple. At the end, they arrived at the lightsaber prizes – which were a HUGE hit!

I didn’t have to tell the boys to play with them – they immediately went into Jedi mode! We even made a smaller pink lightsaber for my daughter and she had no hesitation getting in on the fun with brother and his friends!

For food, we kept it pretty simple with pizza. However, I did want to add in a few special Star Wars themed treats! 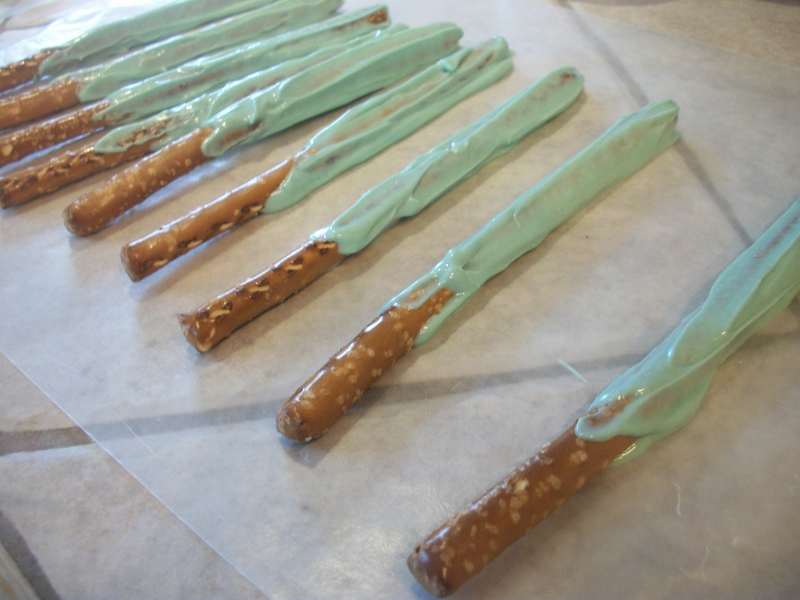 For these lightsaber pretzels, I picked up Hanover’s Pretzel rods and a bark of white chocolate melted and mixed with food color. I left to dry on wax paper for a few hours. 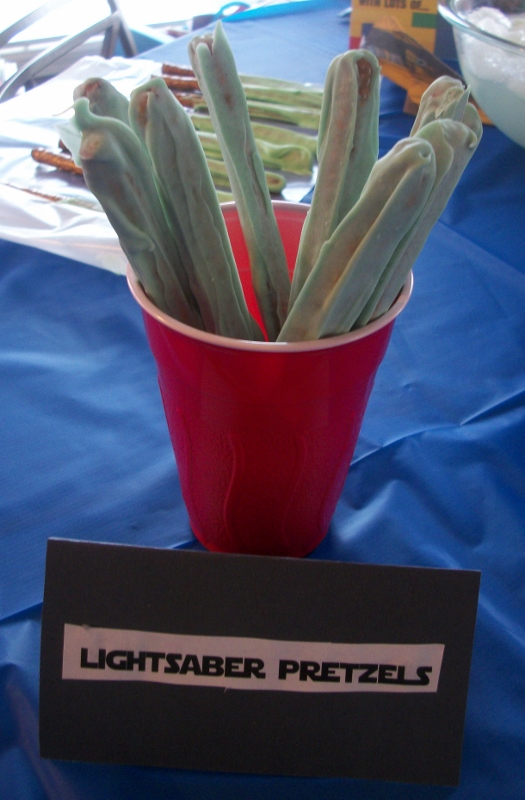 I thought this was a cute way to get some fruit in the mix – Obi Wan Kabob-ies! (Credit: Catch My Party). I used strawberries (because they were on sale at Fred Meyer) and apples (because I already had ’em). Here’s another tip: if your child already has toys with the theme he/she wants for the party, just use those as decor! 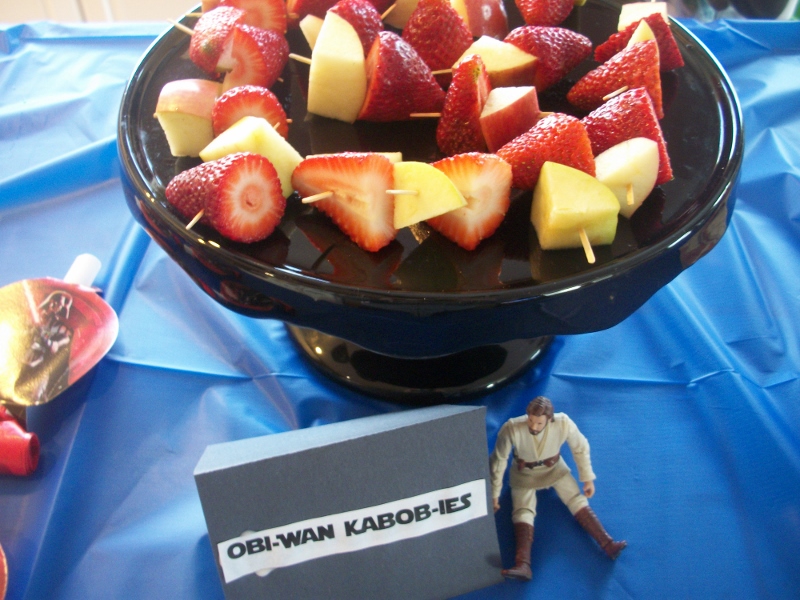 I made a fun “Yoda Soda” punch using 7-Up and lime sherbet. This was a huge hit! 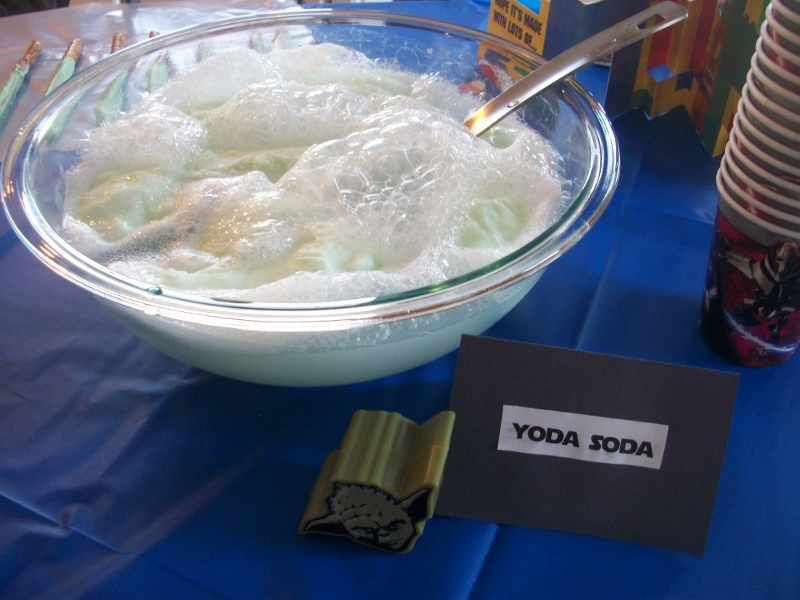 For the signs, I found this FREE Star Wars font which I downloaded. Then I typed out the signs, cut and pasted them to black construction paper and folded to stand up. Took like 2 minutes.

My son prefers ice cream to cake, so I hit up WinCo’s bulk foods department for sprinkles, gummies, and other treats and got a couple quarts of ice cream. We then had an ice cream bar – easy peasy, and another hit! 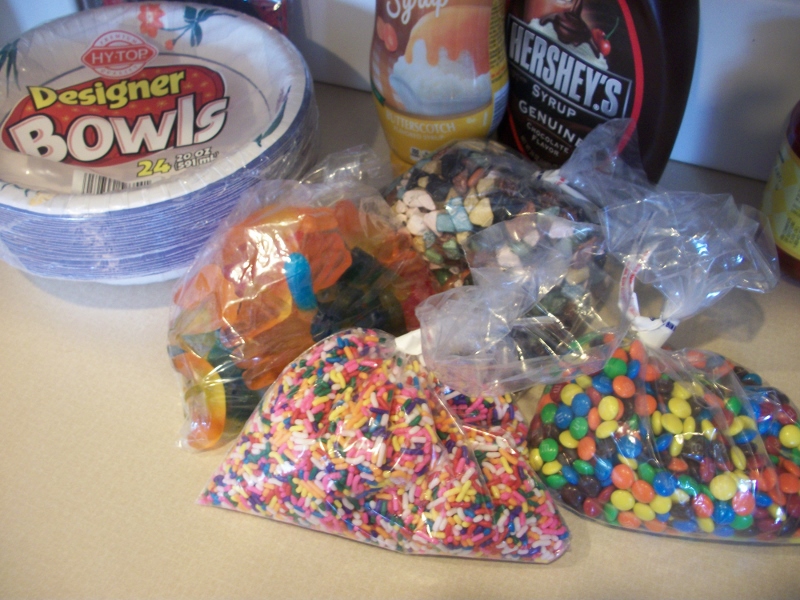 This was a fun, albeit CRAZY party. Some of the boys stayed the night – so yeah, you could call me brave or crazy, whatever you want. But I think it will be one of those memorable parties.

Now…. since my daughter discovered Star Wars herself a few months ago, I wonder if she’ll want the same theme? (Here are my kiddos from last fall – my daughter made her lightsaber out of a gift wrap roll so she could be like brother!) 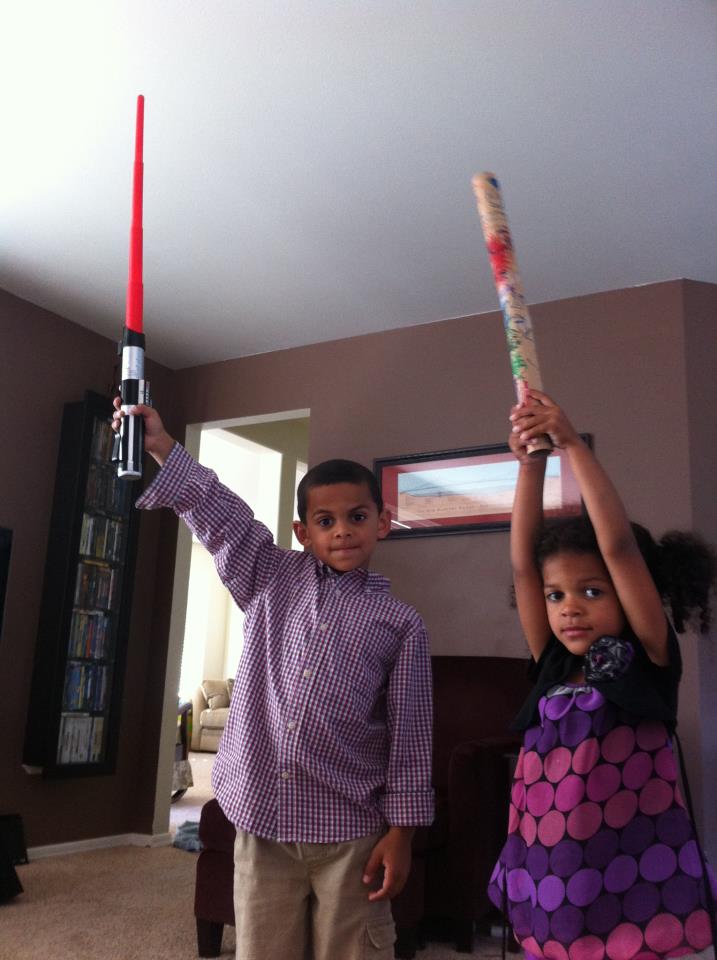 Have you done a Star Wars themed party before? What other ideas did you incorporate?