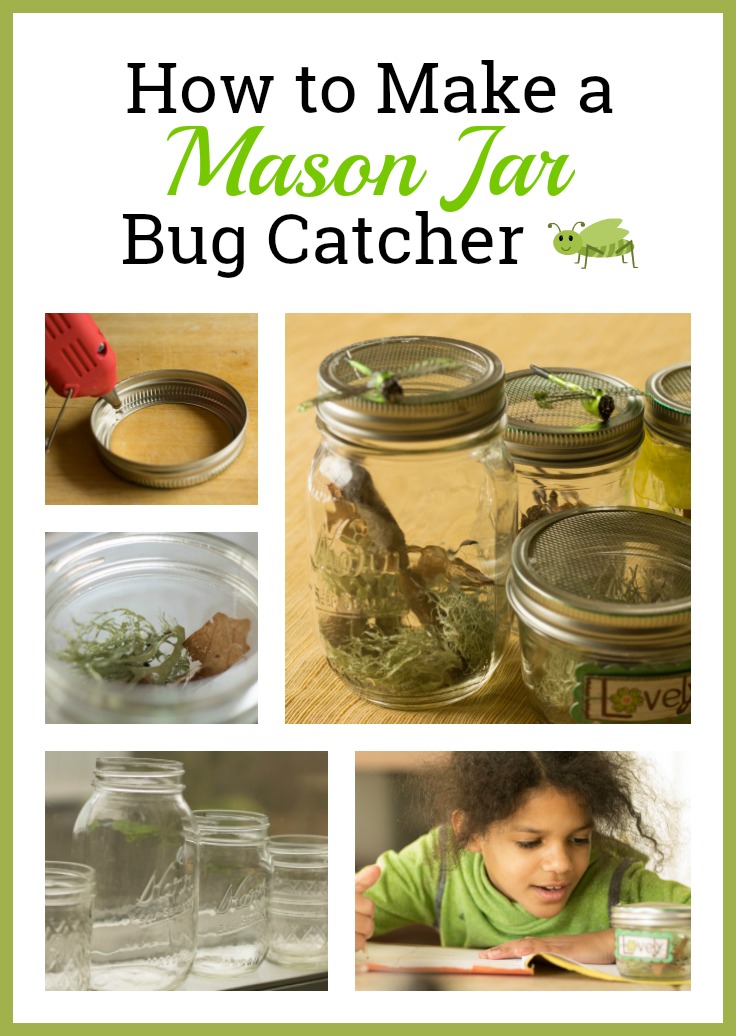 My daughter has decided that bugs are very, very cool. So cool in fact that she hopes to become an entomologist when she grows up! For awhile now, she’s been begging to craft a bug catcher so she can trap and observe this special little creatures.

I figured that surely we could assemble something ourselves without a spendy trip to the craft store. I came up with a very simple, but fun solution that I wanted to share with you today using mason jars.

In fact, I bet you have most of these items lying around your house right now!

Honestly, the only things we did not have on hand we picked up from the Dollar Tree!

For this project, you can use mason jars of any size. I actually used a variety of sizes I had on hand for interest. (I figured smaller bugs may prefer smaller jars and larger bugs, larger ones.) The best part is you can reuse the jars later if you’d like after a thorough washing. (So to my canners out there: don’t freak out. No mason jars will be harmed in today’s post!)

The other thing we picked up from the Dollar Tree were some decorations! We found ribbon, stickers, and even some dragonflies (from the floral décor section of our store). You could really go crazy and fun here – and of course, scour your own craft supplies at home, too.

As far as fancy tools go for today’s craft? Nothing too fancy there, either. Just a hot glue gun and some scissors. I found that the screen was surprisingly easy to cut through and regular old scissors did the trick just fine.

I started by removing the screen from the sieve. This was fairly simple to do on the one I picked up at the Dollar Tree, but you may need to cut yours.

Next, I used the band from one of my mason jars to determine how big to cut the screen. As you can see, I’m trying to maximize the screen to make more than one bug catcher, so I started towards the edge of the screen. Trace around the outside of the band to ensure the screen will be large enough. Then, cut it out. I should say that even though the screen was easy to cut through, it made for some sharp edges and I had little bits of it flying around. Nothing horrible, but probably an activity best left to the adults. (You can leave the bug catching to the kids!)

Using the hot glue gun, go around the inside of the band, and then attach your screen.

Please note that the hot glue WILL come up through those holes, so you may want to use the edge of a pen or other similar tool to press down the screen onto the band as shown above. Otherwise, you will have hot, gluey fingers.

Here’s my completed bug lid! The holes will allow the bugs to get fresh air, but they are small enough to ensure the critter does not make a swift escape!

I was able to make four bug catchers with that single colander from the dollar store! How awesome is that? It probably took me about 10 minutes from start to finish to complete this. While this post is all about making a bug catcher, I wondered if my fun new mason jar lids wouldn’t serve other purposes too…perhaps an awesome way to store and dry flowers and herbs or store potpourri? Hmmm. That may be another post for another day!

Next, my daughter decorated the outsides of the jars with some of the stickers and embellishments she found at the dollar store. (These are entirely optional!). After that, we made a quick nature trip out to search for items to go into the jars.

We found some lichen, sticks, and sticks.

My daughter had managed to find a tiny spider as soon as her jars were done!

She quickly added it to one of the smallest jars (because it was, in fact, a small spider).

She spent some time journaling about the spider in a notebook she made. Then carefully, she released him. (The bug jar will be ready for the next friends to carefully observe!)

This was a fun craft to work on with my daughter and I imagine we’ll have more fun this spring and summer using her jars when the weather is warmer and there are more bugs ready to find! I hope you’ll have some fun making bug catchers with your kids, too.